There is no doubt that poaching for trade has been and continues to be the primary threat to the survival of tigers in the wild. It’s a brutal trade targeting some of the world’s most iconic and majestic species, to churn out trifling and entirely expendable luxury goods such as tiger skin rugs for home décor and expensive wines made from tiger bone steeped in alcohol.

* more tigers were killed in India in the first five months of 2016 than in the whole of 2015?
* since 2007, all breeding populations of tigers have disappeared from Cambodia, Vietnam and Laos?
* since 2000, based on EIA records, at least 1,398 tigers have been identified in the illegal trade?
* in addition to tigers, other Asian big cats are also seriously threatened by trade in their skins and parts? More leopard skins were seized in Nepal in 2016 than in 2015. Since 2000, at least 4,604 dead leopards have been identified in the illegal trade.. 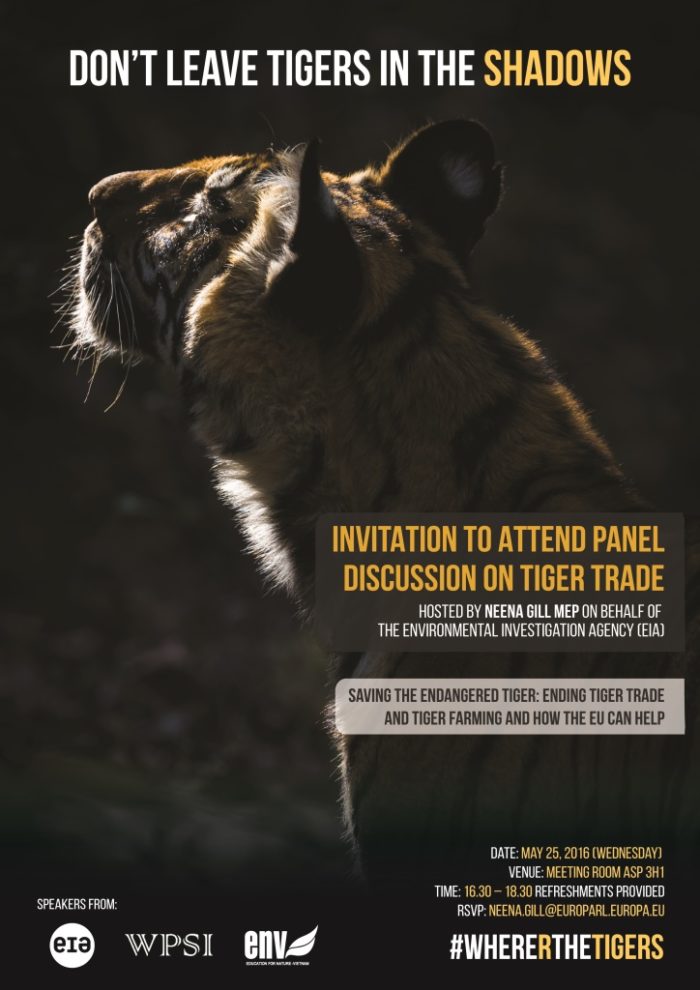 Despite the escalating trade threat, however, the international community has been lulled into a false sense of security about the future of wild tigers in India and in other tiger range states.

With attention focused on the tragic poaching crisis in Africa, where thousands of elephants and hundreds of rhinos are poached each year to feed the gruesome trades in ivory and rhino horn, the world has taken its eye off the ball when it comes to protecting the world’s remaining wild tigers and other Asian big cats such as leopards, snow leopards and clouded leopards.

If we wait for thousands of tigers to be killed to take action, this magnificent species is doomed to extinction – the global wild tiger population is a little higher than 3,200, although nobody really knows just how many tigers are left in the absence of completed scientific population surveys across all tiger range countries.

The greatest contribution that can be made for tiger conservation right now is for the Government of China to amends its laws and policies to unequivocally prohibit all trade in all tiger parts and products. President Xi Jinping has expressed the commitment of his Government at the highest level to end the ivory trade, during the past few months it has announced changes in its laws to end the ivory trade and it’s also encouraging to see that the law is being enforced with a number of arrests leading to convictions of criminals implicated in the illegal ivory trade.

But when it comes to tigers it’s a different story in China. EIA investigators, in multiple investigations, have encountered repeat offenders who continue to be engaged in selling wild tiger skins despite our exposés and sharing of all relevant information with the Chinese Government. To make matters worse, China has adopted laws and policies that allow a legal trade in the skins of captive tigers and possibly also in tiger bone sourced from captive tigers.

What this means is that the Government of China allows and permits tiger shopping from ‘tiger farms’, zoos and other smaller facilities keeping tigers – shockingly, consumers are spoilt for choice as some of these facilities have from hundreds to more than a thousand tigers.

Let’s be clear – it’s nearly impossible to differentiate between captive and wild tiger parts and products. Further, a parallel legal trade in tiger parts sends a mixed message to consumers.


It’s clear that tiger farming and trade in captive tiger parts have done nothing to end trade in wild tigers. With the upsurge in tiger deaths in India for trade, this is a watershed moment where the world needs to wake up to the alarm bells ringing across the tiger’s range. If we really want to save tigers we need to end all demand to kill the tiger trade completely. This is the goal of EIA’s Tiger Campaign.

As a part of this campaign, on Wednesday (May 25, 2016) we are taking this issue to the heart of the EU; Neena Gill MEP is hosting, on behalf of EIA, a major parliamentary event calling for EU action to end the tiger trade.

EIA together with partners Education for Nature – Vietnam (ENV) and Wildlife Protection Society of India (WPSI) – will give insights into the situation on the ground in China, Vietnam, India and other countries, and discuss practical policy measures the EU can take.