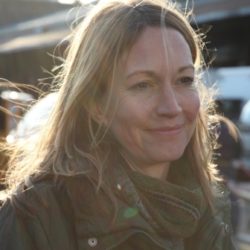 What an incredible week for the world’s whales and dolphins it’s been. Last Monday morning we listened live to the judgement from the UN International Court of Justice which essentially ruled that Japan’s scientific whaling in the Antarctic does not comply with the terms of the International Convention for the Regulation of Whaling (ICRW) that govern such whaling (it is therefore illegal) and that it should “revoke any extant authorization, permit or licence granted in relation to JARPA II, and refrain from granting any further permits in  pursuance of that programme.” 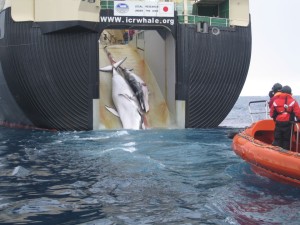 A whale and calf being loaded aboard a factory ship, the Nisshin Maru (c) Customs and Border Protection Service, Commonwealth of Australia

So JARPA II, the biggest wildlife science fraud ever, is effectively over.

The issue of scientific whaling has dominated the whaling debate since the beginning of the moratorium. When I first started working on whale conservation in the late ’90s, Japan was hunting about 400 minke whales in the Southern Ocean and another 100 or so minke in the North Pacific. At the same time there were controversial discussions about whether or not the moratorium should be lifted for so-called ‘controlled’ whaling in coastal waters.

As discussions progressed, Japan repeatedly upped the ante – not least when, in 2005, it suddenly more than doubled the number of minke whales to be killed in the Southern Ocean Sanctuary, and added humpback and fin whales into its self-imposed catch quotas – the JARPA II programme. Although it never carried out the full scale of JARPA II, it killed 3,660 whales under JARPA II and a staggering 14,643 altogether under the guise of science since the moratorium.

When I explained to my 12-year-old daughter what had happened with the ICJ decision and the fact that Japan been whaling in the Southern Ocean since 1987, her response was “didn’t anyone notice before that they weren’t really doing science?!” Of course, everyone did, and at this point I really want to say hats-off to all the scientists (too numerous to mention but some are listed here) who over and over again were forced to rebut Japan’s ‘science’ at the International Whaling Commission (IWC). They kept doing it, fighting for science at meeting after long meeting (some for decades), review after review, when at times it must have felt like a pointless and soul-destroying exercise since the science wouldn’t have passed a solid secondary school exam board. But without this consistent and comprehensive scientific critique of Japan’s ‘research’, we might not have got the ICJ decision.

Of course, it’s too early to tell what all this really means, and not surprisingly there is widespread speculation and a great deal of posturing from Japan’s pro-whaling politicians. Japan has stated it will abide by the decision, and has categorically stated it will not hunt in this Antarctic in the next 2014/15 season. But there are clear signs that a new proposal, which would have to be presented to the IWC’s Scientific Committee in 2015 with a view to hunting later that year, is a possibility. 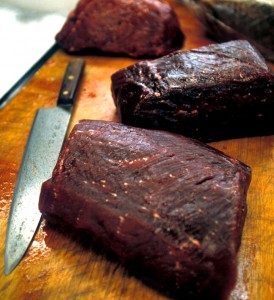 There are other broader implications – does this open up the small but significant Japanese market to the import of more Icelandic fin whale, which already constitutes about 20 per cent of the Japanese market? Will those Japanese hunters that carry out whaling, drive hunts and hand harpoon hunts in Japan’s coastal waters start catching higher numbers in anticipation of a gap in the market left by Antarctic minke and fin whales? Will some of our northern IWC member governments find the courage to take Japan to court for its North Pacific ‘scientific’ hunt, which is equally as heinous and non-scientific as the Antarctic hunt? Or will Japan expand its North Pacific hunt, hoping that countries in the northern hemisphere don’t have the resolve? Who knows? Whatever happens, this year’s IWC meeting in Slovenia, the first in two years after a decision to move to biennial meetings was taken in 2012, is certainly going to be an interesting one.

But there are other implications – one day after the ICJ decision, a small notice was quietly placed on the international website of Rakuten, a Japanese company which EIA had exposed less than two weeks earlier as the world’s largest global online trader in whale products. The notice read:

In accordance with the March 31, 2014 ruling by the International Court of Justice, Rakuten Ichiba today asked merchants to cancel sales of whale meat products on the Rakuten Ichiba marketplace. Rakuten has also requested these merchants to remove all related items from their online shops within the next 30 days.. 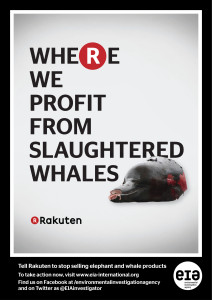 EIA parody of Rakuten adverts, used in our campaign to pressure the company to cease whale meat sales (c) EIA

By ‘all related items’, it means not just whales caught in the Southern Ocean but also whale products imported from Iceland as well as dolphins and whales caught in the Taiji drive hunts, which featured heavily in the Rakuten adverts. This is huge – Rakuten, Japan’s largest e-commerce marketplace, has banned all cetacean products, while Amazon, which is the second-largest in Japan, did this in 2012. Most of Japan’s major retail chains will also not stock cetacean products, and those that do might now reconsider as Antarctic whaling is effectively illegal. Without a market, what future is there for whaling?

Already there are a fair number of naysayers who think the ICJ decision is hype, who (rightly) point out that the judgement itself is carefully limited to a specific programme, that Japan will return with another proposal, and that they don’t know what all the celebration is about.

I disagree – it is much more than that. It is an historic decision, momentous, and game-changing. It is a vindication of years and years of campaigning and work by countless NGOs, scientists, individuals and governments. It is incontrovertible confirmation that scientific whaling is wrong, which should deter other countries from trying to exploit the loophole (South Korea thought about it last year) and it has already yielded significant progress in the form of the world’s largest online trader of whale products banning them.

And don’t forget – 2014 is the 20th anniversary of the Southern Ocean Sanctuary, and for the first time in its existence it actually will be a sanctuary. Surely this is worth celebrating?

EIA extends a huge and heartfelt appreciation to the Australian Government, its IWC team and all its experts, the New Zealand Government and all the NGOs and individuals who made this happen.