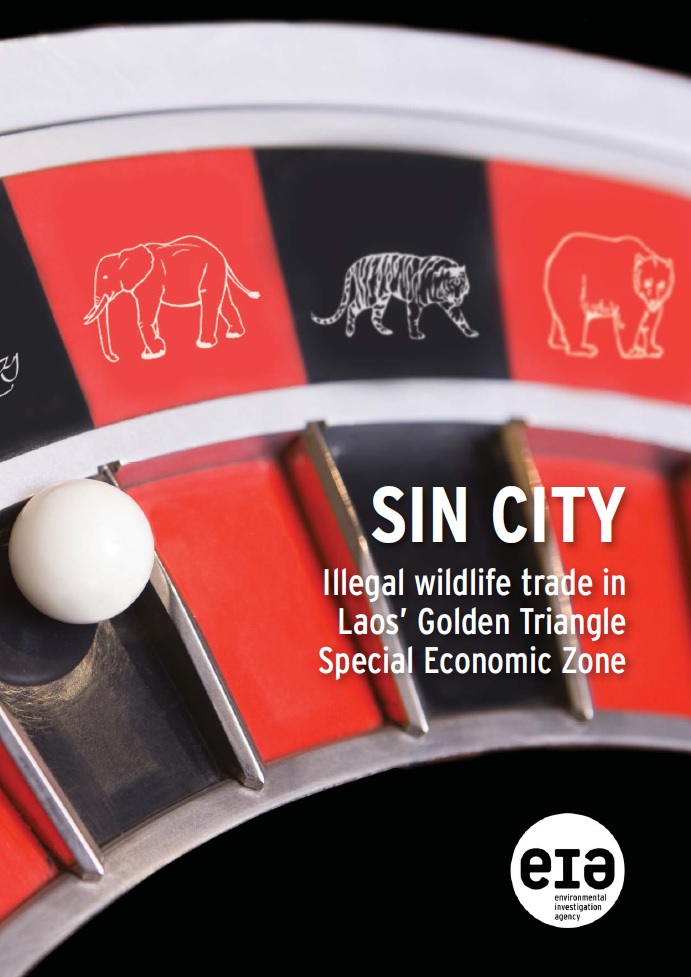 Subsequent accounts suggest it was a multi-agency response and, on the face of it, it was a welcome and encouraging first step from the Laotian authorities. The remain questions, however, as to the impact and scope of the effort and what is planned in the long-term.

For example, why would the authorities burn the evidence they presumably need for prosecutions? It’s not clear if they have filed any charges and are planning to take anyone to court.

It wasn’t just restaurants that were raided; footage from Laos TV shows authorities in the Golden Triangle Treasure Hall gift shop where two stuffed tigers, seven tiger skins, one leopard skin and vast quantities of ivory had been documented by EIA and partner Education for Vietnam (ENV). Yet it’s not clear if the ivory, stuffed tigers and other illegal wildlife products from this shop were destroyed as well.

Likewise, it’s not apparent from the stills and video footage available whether the tiger skeletons from the vats of wine in restaurants and retail outlets in the GT SEZ Chinatown were also destroyed. 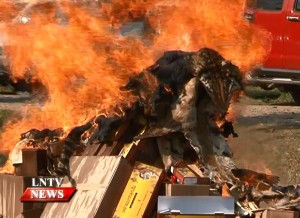 Contrary to the assertion in the Vientiane Times that local people had supplied the wildlife that was confiscated and burned, the stuffed tigers had come from China and six of the seven tiger skins had been trafficked from Mong La in Myanmar, with the source of those tigers possibly India, Thailand and Malaysia.

As a Party to the UN Convention on International Trade in Endangered Species (CITES), Laos should have taken action to help determine the source of the tiger parts before destroying them. In July 2014, the 65th Meeting of the CITES Standing Committee adopted a recommendation requesting Parties making seizures of tiger skins to take photographs of the stripe patterns (an identifying feature as unique as fingerprints) and share them with countries maintaining stripe-pattern profile databases of wild tigers, such as India. In this way, efforts can be made to determine origin and shed further light on the transnational criminal networks involved. It is not clear if the authorities in Laos implemented this action, or if DNA samples were taken of the tiger, ivory and other wildlife products before they were burnt. 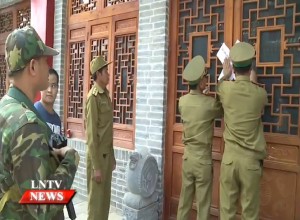 Officials seal a business in the raid on the GT SEZ, screengrab via Laos National TV

It is also not clear if the Laos authorities are investigating associations between the Chinese business individuals engaged in illegal wildlife trade at the GT SEZ and their contacts in China and Myanmar, or whether any financial investigations are under way to help map those connections.

Crucially, there have been no reports on what is happening to the live bears and tigers at the GT SEZ, or what action is being taken to end tiger farming – again, consistent with Laos’ commitments under CITES. It was clear from our engagement with the live animal enclosure manager that the intention is to expand its operations to industrial-scale production of tiger bone wine. There was no mention in the media as to what action, if any, Laos is taking to prevent this.

Laos is currently subject to CITES trade suspensions for failing to submit an adequate National Ivory Action Plan and the recent law enforcement action may be a sign of a willingness to act when under the spotlight.

But what we would like to see is tangible evidence of an intelligence-led enforcement response, an effort to investigate the individuals involved in the trafficking of tigers and other wildlife into the GT SEZ and a proactive response to end tiger farming. We look forward to working with relevant national and intergovernmental agencies to encourage a meaningful response in Laos.

EIA recognises that Laos cannot do this alone and, accordingly, Sin City sends a clear message to the Government of China over its responsibility to investigate the roles of Chinese nationals and businesses associated with illegal wildlife trade at the GT SEZ.

So far, our appeal to China to act has been met with silence.