It may seem a bit odd to attend the world’s largest seafood trade event as part of our quest to bring an end to Iceland’s whaling and exports of whale meat. However, the 2015 Seafood Expo Global/Seafood Processing Global in Brussels last week provided a very useful opportunity to meet Icelanders in the fish business and discuss whaling and its damaging impact on Iceland’s reputation.

The event is huge and attended by companies from all over the world exhibiting their products, including enormous quantities of dead fish and some amazing technologies and equipment. It was encouraging to see the development of new technologies which could reduce the damaging environmental impact of fisheries.

I was particularly pleased to see serious efforts to replace the use of polystyrene with reusable, robust fish boxes that would last for years and not break down into microplastic pieces, adding to the burgeoning quantity of damaging plastic littering the oceans.

We were pleased to attend a discussion on what the EU is doing to tackle illegal, unreported and unregulated (IUU) fishing, hosted by Karmenu Vella, the European Commissioner for the Environment, Maritime Affairs and Fisheries. The South Korean Fisheries Minister and Steve Trent of the Environmental Justice Foundation were two of the participants. IUU fishing takes more fish than all the EU countries together, having a serious impact on fisheries around the world, particularly in developing countries.

The Don’t Buy From Icelandic Whalers Coalition, of which EIA is a member, placed ads in the online Brussels Times and Fish News last week which called on buyers not to purchase fish from companies associated with Icelandic whaling and a press release issued on the opening day of the Expo is being picked up by industry publications and the Icelandic media, focusing even more attention on Icelandic whaling.. 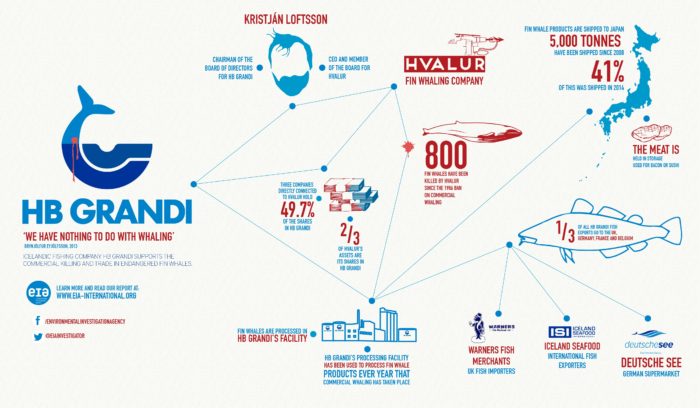 Icelandic companies involved in the fishing industry had a very high profile at the Expo, providing us with a great opportunity to talk to people in the business about the fin whaling carried out by Kristján Loftsson and its impact on Iceland’s reputation. There was a lot of eye-rolling and several said Loftsson does whatever he wants regardless; with regard to the very high cost of exporting fin whale meat to Japan, some said he did not care if it was not cost-effective – he just wants to do it and the Icelandic Government lets him. 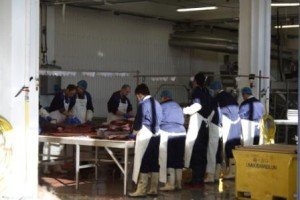 Loftsson is Chairman of the Board of Icelandic seafood giant HB Grandi and a major shareholder. EIA documented fin whales being processed at the HB Grandi facility last summer, confirming the active and ongoing link to his whaling company Hvalur.

It was curious that HB Grandi was situated away from the other Icelandic companies at the Expo. A couple of Icelandic businessmen were overheard commenting that its stand didn’t seem to have many visitors and at one point my colleague Kate O’Connell, of the Animal Welfare Institute, was the only visitor to the stand when she met with HB Grandi’s marketing director.

Our discussions on whaling always moved on to other interesting discussions and we learned a lot about what Iceland is doing to ensure its fishing is sustainable, recognising that this is vital to a long-term future of both the industry and the country’s economy. New technologies and fishing methods are being introduced, such as trawling above the seabed to reduce damage rather than scraping it, attaching ‘pingers’ on fishing gear to ensure lost gear can be retrieved and providing facilities to clean and recycle old and damaged nets. A representative from one of the shipping companies asked us for information on the issue of ship strikes and how the company might contribute to work on this issue, informing us of what the smaller vessels in his company are doing to reduce this threat to whales and vessels.

A lot is being done in Iceland to ensure sustainable fisheries and reduce environmental damage but the dark cloud of whaling mars its reputation and threatens its businesses.

We will continue to put pressure on the Icelandic seafood industry and the Government until such time as Iceland puts an end to the slaughter of endangered fin whales and minke whales.