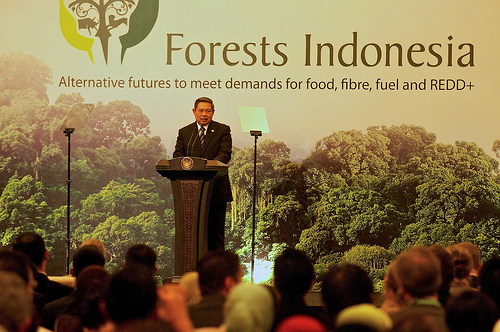 I have been in Jakarta this week, on invitation from the Center for International Forestry Research (CIFOR), to speak at the Forests Indonesia Conference it was hosting; not usually something to write home about, but something happened during the day that was quite extraordinary.

The opening key speech was given by the President of Indonesia, Susilo Bambang Yudhoyono. I don’t know of many countries where the leader of any nation will not only open a meeting on forests, but also make a pledge of such consequence as he did.

“I will continue my work and dedicate the last three years of my term as President to deliver enduring results that will sustain and enhance the environment and forests of Indonesia,” he said.

That’s a pretty big statement to make. The question is, can he seriously deliver on the commitments made by Indonesia? 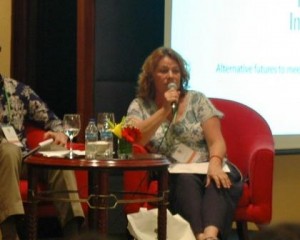 In the past 11 years of working here with our friends in civil society, we have faced some major challenges and successfully delivered some extraordinary changes. From the reform of Indonesia’s law addressing the harvest and trade of timber, the signing of the Indonesian EU Voluntary Partnership Agreement, to the new Timber Regulation from Europe, these are concrete steps toward sustainability. But none of these things would have been achieved without civil society. And we could not have concluded anything without full participation of the Government and industry.

Ensuring a space is created where everyone has a seat at the table and is included in the decision-making process is the only way forward.

“We need to go into partnership with all stakeholders to sustainably manage our forest resources … I encourage all of you to forge greater cooperation with international partners,” the President told an audience which included representatives from the timber, mining, coal and palm oil industries.

These industries in Indonesia do not have a good track record for dialogue nor, for that matter, transparency. Ninety per cent of the deforestation of Indonesia’s forests is driven by the illegal harvesting of timber, the pulp and paper industry, mining, and clearance for palm oil plantations. Our demand for all of these commodities is increasing and, in response, Indonesia plans to expand production. The business community has asked for a clearer approach to the REDD+ initiatives so they can be part of the climate change challenges facing Indonesia. They say that they too must be involved in any decision-making, as civil society and the Government cannot do so alone.

If this is truly what the business community wants, then it does not have to wait for the Government to arrange dialogue – sometimes, taking the first step is all it takes to create a productive avenue for bringing solutions to the table. But with corruption and the lack of transparency prevalent within all areas of Indonesia’s forestry sector, Industry needs to be part of that conversation too. We all know that the laws within Indonesia are there to ensure confusion, not clarity, and there is nothing better than confusion to spread corruption.

As always, we have to work on the core issues which create good governance and produce reform. Ensuring that communities and indigenous people are part of the decision-making process is crucial to this. The answers to some of the big questions lie within these communities, as they do with civil society generally. But nothing will move forward until the approach towards land tenure conflict changes. This is essential. With confusion reigning over boundaries and a lack of consultation creating conflict, none of the 40 or so REDD+ pilot projects are going to show any tangible results, which is ironic given that the whole purpose of these projects is to clarify issues such as this. As REDD+ Task Force Chairman Pak Kuntoro said: “Spatial planning must encompass how access is granted for the rights of local communities to use customary land.”

While I was really impressed with the President’s speech, it doesn’t matter how well it was delivered – he will not be able to deliver his commitments alone. He is going to need to ensure the champions within his Government receive the highest level of support and that the political will demonstrated in his speech is translated into real activities.