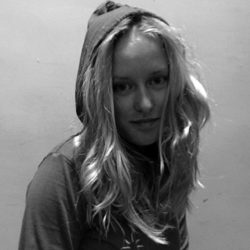 Only two days into my new job as Visual Communications Officer for EIA, I found myself on a plane to Jakarta, Indonesia. 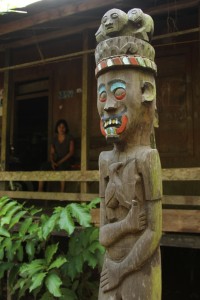 Indonesian civil society, i.e. community members, the people who are directly working and living off the forests, are now officially recognised as an integral part of the negotiations between the European Union and the Indonesian Government on illegal logging, and the aim of these workshops was to provide the appropriate skills and resources to enable them to capture evidence and to ensure their voices are heard globally. We took with us four kits comprising stills cameras, video cameras, hidden cameras and GPS devices.

My role on this trip was to produce a short film documenting EIA’s training work, so I spent much of the time filming and photographing the workshops, while also trying to absorb as much information as possible as I’ll be facilitating these workshops myself in the future. Video blog still to come!

On our first day in Muara Tae, before the workshops began, we spent time walking through the older, more traditional part of the village. As you walk further from the road, the houses begin to resemble the wooden long houses traditionally associated with Dayak culture. Beautifully carved totems stand outside many of the houses as a tribute to deceased family members. 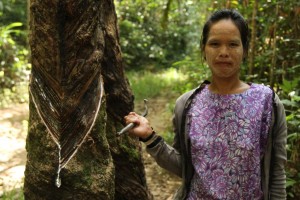 Tapping rubber in the forests of Muara Tae (c) EIA

We walked through the forest and came across two women rubber-tapping, who were kind enough to let us spend some time filming and photographing them. The forests provide a living for these women, one of the many reasons the Dayaks need and want to protects their forests. I was told that the money they can make in a few hours from rubber-tapping amounts to the same made in a 12-hour day working in the nearby coal mine.

The house we were staying in sits along the main road, as many of the houses now do in Muara Tae. As you approach the village, you pass through the newer end of the town where many of the mine and plantation workers live. Trucks and buses headed for the mine thunder past at all hours of the day and night. The pick-up trucks taking people to work at the mine have flags towering three metres above them, because the mining trucks are so big they would otherwise be invisible. It’s an unnerving sight, considering the reason we were staying there. 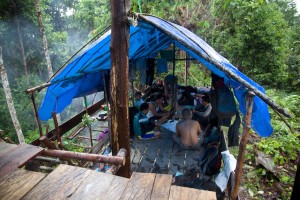 Training began on a Monday, and by Tuesday night the participants’ heads were full of information and new skills. On Wednesday, we set off on a four-hour hike to a remote forest camp, giving them the opportunity to try out their new skills along the way. Many of the people living in Muara Tae have forest huts in which they live for short periods of time, such as during times of fruit harvest. This camp has been turned into a look-out post, a point of defence against encroaching deforestation. Consisting of two high wooden platforms, it’s quite a sight to come across in the forest.

We were woken around 2am by a heavy rain storm, and everybody put on as many clothes as they could find to shelter from the cold and wind. By sunrise, the rain was still pouring. According to Dayak culture, this means the ancestors are happy that we have come to the forest – however, it did mean we had to abandon our plans to visit the palm oil plantation and illegal logging sites that day.

We held on until the afternoon in hope of a dry spell but, with no luck, the group trudged back to the main village through the wet and muddy forest. The rain didn’t dampen our spirits, though, and we had a review session when we returned. The improvement in film, photography and GPS use from day one was pleasantly surprising and we finished the day feeling positive and motivated. 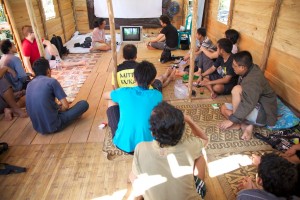 During the week, I interviewed several of the participants for the training film, and was really interested to find out more about why they had come on the workshop and what they hoped to do with their new skills.

After travelling back from Muara Tae to Balikpapan along that dreaded road (a nine-hour journey with many pot holes), we flew back to Bogor where I spent my last two days hanging out with Telapak and Gekko Studios staff, getting to grips with their work and trying to remember everyone’s names.

The past two weeks have gone really fast – I’ve met some incredible and inspiring people, survived a tropical downpour while sleeping in a tree house and fallen off a moped, bringing home some pretty impressive bruises!

I’m sad to leave Indonesia when there is still so much more to experience, but I’m looking forward to returning to London and getting to grips with my new job with EIA.