I was a bit giddy by the end of last night – and for a change it wasn’t because of jetlag!

The Healing Without Harm event at the annual David Shepherd Wildlife Foundation lecture saw me sharing the Royal Geographical Society stage with some of the giants of conservation. 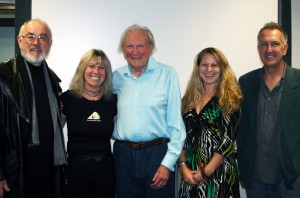 The man himself, David Shepherd, introduced an evening that was compered by the awesome Mark Carwardine, (http://www.markcarwardine.com/ ) who shared a poignant and personal story of the violence and loss associated with rhino poaching in South Africa.

It was a personal highlight to share the evening with Jill Robinson of Animals Asia who, with her extraordinary team, has worked tirelessly to end the vile practice of farming and milking bears for their bile in China and Vietnam. There wasn’t a dry eye in the house as she recounted the campaign through the photos and stories of the bears they have rescued.

Particularly encouraging was her update on a home-grown media campaign by China’s journalists and bloggers, caricaturing the ugliness of the bear farmers and the bear bile product industry; it’s fantastic to see Chinese civil society taking the lead in turning the tide on commercial operations that traditional Chinese medicinal practitioners say is unnecessary and unwanted. 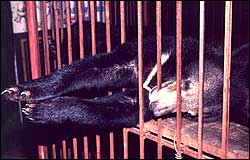 Bears are drugged with the illegal drug, ketamine, before being milked for their bile in Vietnam (c) Animals Asia

Jill and Animals Asia Foundation desperately need your help to send a message to the Vietnamese Government urging it to stop the eviction of the AAF bear sanctuary. The trauma of putting the 104 rescued bears back into transport cages, reminiscent of their torturous past, is unbearable. Please sign up here.

‘Not in the name of TCM!’ was the overriding message from the other guest speaker, Dr Zhao of the UK Association of Traditional Chinese Medicine (ATCM). He insisted that TCM cannot be used as the excuse or rationale for the torture of bears, as it defeats the central tenets of TCM in harmonising with nature.

On behalf of EIA, I gave a short teaser of the preliminary findings from our most recent investigations into the tiger trade. We’ll be releasing are full analysis next month, so be sure to sign up to our Facebook page and to TigerTime to get the early-bird download and our call to action in due course!

The night ended with a lively Q&A, including some great ideas from the audience for outreach and awareness activities, and some chilling news from one member who had witnessed first-hand the exploitation of villagers in Africa by the military-style poaching gangs killing rhinos.

Quite rightly, Mark brought up the shameful badger-culling policy of our own Government and how it is going to impact the UK’s moral standing at future international meetings where the UK is otherwise a champion for the environment and nature. Want to show your love for the badgers? Join the Badger Dance this Sunday from noon to 4pm at Parliament Square in London.