Gibson Guitars has finally faced the music. After nearly a year of crying foul, running to the Tea Party for political backing, seeking audience with every possible media outlet and hiring a DC lobbying firm to change the law under which it was being investigated, Gibson Guitars has acknowledged that it did, in fact, import illegal wood in violation of the Lacey Act.

It is fortunate for the world’s forests that this truth came to light before a Gibson-backed legislative effort, known as the RELIEF Act, could be passed to strip the Lacey Act of key provisions driving change around the globe. 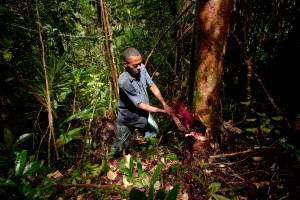 The conclusion on August 6 of the highly public investigation into Gibson’s trade practices was a watershed moment for the 2008 Lacey Act amendments, and for similar new laws in consumer nations designed to curb illegal logging and associated trade. Under the terms of a Criminal Enforcement Agreement with the US Department of Justice (DOJ), Gibson has agreed to pay over $600,000 in penalties, including the forfeiture of illegally imported rare wood from the protected forests of Madagascar. For the first time there are real consequences for illegal actions in a global timber market that has historically been ‘no questions asked’.

Even before the case was settled, the 2009 investigations of Gibson had a significant impact on sourcing practices within the music industry.  Instrument makers essentially stopped buying Malagasy rosewood and ebony, which had been illegal to harvest in Madagascar since 2006, as a result of these visible enforcement actions. In addition, the spotlight the case placed on the illegal Malagasy rosewood and ebony trade also led to crackdowns in China on Chinese importers of this material.

The US DOJ exercised remarkable restraint in its prosecution of Gibson, proceeding cautiously in this first case and demonstrating a measured approach to Lacey Act implementation. While the agreement suggests that Gibson Guitars knowingly imported illegal wood from Madagascar – a crime punishable by up to five years in prison and hefty fines – and perhaps deserved a bigger penalty, Gibson has for now avoided all criminal charges for its conduct. This is a far cry from the alleged overzealous enforcement by jackbooted Government thugs, as claimed by those who seek to gut the Lacey Act’s enforcement provisions. However, companies should take note of the facts in this case and the significant penalties incurred, as well as the due care specifications outlined in the agreement. The US is taking the Lacey Act seriously and future prosecutions may not be so generous. 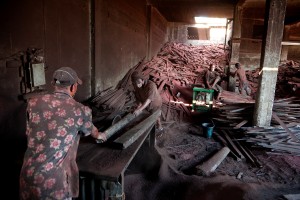 At the same time, the spectre of enforcement actions for violations of the Lacey Act and the imminent implementation of the EU Timber Regulation have caused businesses in supply and processing countries around the world to scrutinize their practices. In particular, China, the world’s leading importer of illegal timber, has documented a three-fold increase in its sourcing of raw materials from countries such as Canada, the United States and New Zealand since 2007 in order to meet demand for legally sourced products for manufacture and re-export.

There is no doubt that the Lacey Act is changing supply chains and increasing industry transparency. We are seeing that importer demands to know the legality of a product bring about real change on the ground, where ecosystems and the people who depend upon them were once ravaged without recourse. These shifts are also leveling the playing field for legitimate business operators working to ensure legal sourcing.

It is important to remember that illegal logging does not solely consist of the unlawful cutting or exporting of timber and wood products. The criminal underbelly profiting from this lucrative and destructive illegal trade has also led to the killing of activists working to protect invaluable forests, death-threats against informants, as well as forced labor and other human rights abuses, to name a few. This horrific conduct is sustained and supported by indiscriminate buyers throughout the supply chain. Laws such as the Lacey Act, and cases such as Gibson, send a strong signal that these practices will no longer be tolerated. It is a landmark moment on the path to shutting down illegal trade and supporting jobs in the forest products sector, while bolstering sustainable development and protecting the human rights of those who live in and depend on the forest. 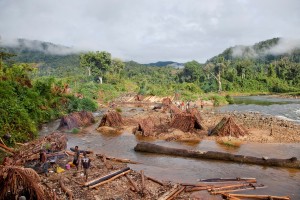 Some have highlighted the US Government’s investigation and seizure of Indian rosewood and ebony imported by Gibson as evidence that the Lacey Act is unworkable and needs to be changed. Court documents show that the US Government found significant discrepancies in the Customs and declaration paperwork accompanying Gibson’s imports, ostensibly in an effort to skirt an Indian law that prohibited the export of the fingerboard blanks in question. In this case, officials later learned that Gibson also continued to use the same supplier – TN GMBH of Germany, which had supplied Gibson with the illegal Malagasy ebony. While there was no action taken to prosecute any possible misdeclaration or other violation of the Lacey Act, the Government’s investigation, especially in light of the alleged earlier violation of the law now known to be true, was warranted. The fact that the Government opted not to pursue charges in this case as part of the broader agreement, again shows prosecutorial restraint.

Now, in the wake of this unprecedented outcome in the Gibson case, Gibson has the opportunity to learn from its wrongdoing and to become a real leader in a field that increasingly depends upon sustainable and legal sourcing of rare tonewoods. It is unfortunate that, for the moment at least, Gibson Guitars CEO Henry Juszkiewicz has chosen instead to cling to his rhetoric that has now been proven false, about unfair enforcement of the Lacey Act, a law that could well prove instrumental to the future success of his industry.