Next month, EIA marks its 30th anniversary, and here founder director Jennifer Lonsdale looks back to the 1984 investigation into whaling in the Faroe Islands which would become the organisation’s first official campaign.. 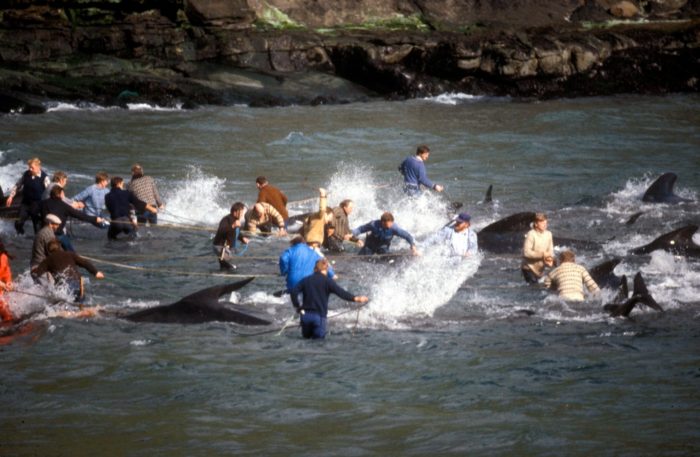 A year ago I wrote a blog about the 1983 Balaenoptera adventure, when we sailed to northern Norway to document its minke whale hunt. The success of that trip led Allan Thornton to suggest that Dave Currey and I go to the Faroe Islands in the summer of 1984 – exactly 30 years ago – to investigate the pilot whale hunt. EIA did not exist and we were all earning livings doing other things.

What was then the world’s largest whale hunt had received virtually no international attention and little was known about it. The international ban on commercial whaling (the moratorium) had been agreed by the International Whaling Commission (IWC) in 1982 but did not apply to pilot whales as they are considered to be small whales. However, the Faroese Government had also instigated a hunt of up to five fin whales per year for supposed ‘scientific’ research.

Over the 400 year history of the hunts, an annual average of 880 pilot whales had been killed on the Islands. In 1978, the numbers being killed began to increase dramatically. Between 1980-83, an average of about 2,500 per year were killed per year. Scientific concern was being expressed about the impact of the increase on pilot whale populations in that area of the North Atlantic. 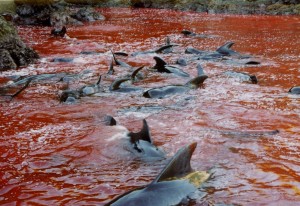 Pilot whales butchered after being driven to shore (c) EIA

This dramatic escalation of hunting coincided with a remarkable rise in the standard of living in the Faroes due to its entering the international fish business with the implementation of its 200-mile Exclusive Economic Zone (EEZ) in 1977. Faroese people were now enjoying a standard of living similar to that of Scandinavia, and the Danish tax payer was providing very significant infrastructure subsidies. The Faroes had fast become a highly modern society.

Working out how to get to the Faroe Islands in pre-internet times was tricky – the travel agent tried to send me to Faro in Portugal. We had very little money, so our option was travelling in Dave’s classic VW campervan, which provided the added benefit of accommodation and cooking facilities.

From London to Torshavn, the Faroese capital, took two days by road and two ferries. On our first evening, looking out over the gorgeous islands from Torshavn, we questioned what we were doing in a place we knew very little about and where we knew no-one. This thought has likely been repeated numerous times during the subsequent 30-year history of EIA as investigators have travelled all over the world.

Next morning, we decided to visit the Natural History Museum. There we met a friendly scientist who provided us with much useful information about the Islands and the hunt including its history. A plan was developing and we decided to see the Director of Fisheries. He was a fount of information and described the pilot whale hunt as ‘sport, tradition and a way of obtaining cheap food’. 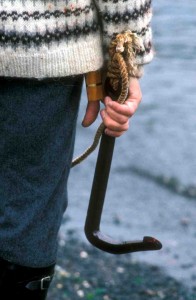 We had discovered that hunts could take place any time of the day or night, 365 days a year in any of the licenced whaling bays. To have a realistic chance of witnessing a hunt, we had to patrol the whaling bays on Streymoy and Esturoy, islands joined by a bridge. Hotels were now off budget and we discovered a lovely place to park beside a fjord with streams running down the hillside, providing water and washing facilities. The water was really cold but we got used to it. Nosy sheep seemed to wonder what these strange people were doing. Our cooking was quite creative on the small stove.

One morning we came across a kill of 54 whales that had just taken place in Fuglafjørður, so we joined the people on the beach. A team of officials measured and marked the whales. Children played around them in the community’s party atmosphere.

We watched and took photos as the whales were butchered and people lined up to collect their free shares of meat and blubber. We learned the procedures for the hunting and distribution of meat and blubber, first enshrined in Faroese Law in 1832 with the objective of ensuring communities could receive maximum and fair benefit from the whales that provided much-needed food in harsh times.

We also talked to scientists who were engaged in a new scientific research programme which lasted for several years. Details from each whale were recorded and samples taken.

Wading about in whale blood all afternoon was unpleasant and sad but we knew we were gathering important information and learned so much. The people we met were friendly and interesting and many people seem ignorant of the global opposition to the hunting of whales and the ban on commercial whaling. Despite the huge economic and social changes of the past few years, there was very little consideration that the hunting should not continue as it had done for the past 400 years.

That night we were invited to stay with a delightful couple in their lovely home. The shower was hot and welcome and a bit of a contrast to a cold stream – but accessed by hopping over their tub of meat and blubber.

The Faroe Islands are a chilly North Atlantic paradise, with gorgeous green hills rising from the fjords. Waterfalls garland the hills and wildflowers and birds abound. Puffin colonies quickly became my favourites. We loved the ecosystem and Faroese people, always ready for a good chat. They did find us a bit odd driving around every day in our van. It is sad that this amazing country carries the dark shadow of this horrific and unnecessary hunt. 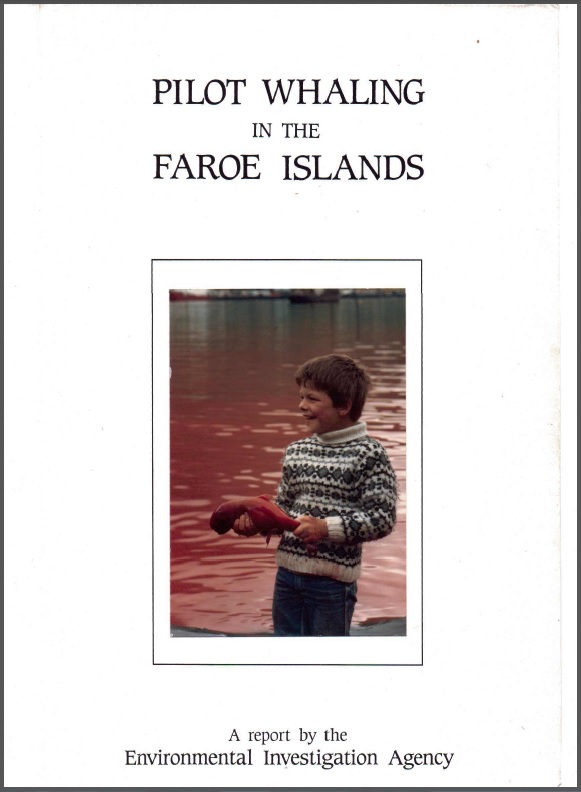 We returned to the UK with a huge amount of information and clocked up 4,000 miles in the month. We typed up the information gathered on electric typewriters – no computers in those days – and paid for the final version of our report to be professionally word processed and photocopied. We collated 100 copies by hand and Pilot Whaling in the Faroe Islands – A report by the Environmental Investigation Agency became EIA’s first ever report.

This well-received report outlined the history of the Faroese pilot whale hunt and how it was conducted. It looked at the social, economic and political structure of the Islands and included a section on the fin whale hunt.

We concluded the hunt to be cruel, potentially unsustainable and no longer necessary for the survival of the Islanders. It was time to end the slaughter and celebrate the contribution the whales had made to Faroese people’s survival in harsh times past.

The success of the trip led Allan, Dave and I to formally found EIA in September 1984. It was a couple of years before EIA could afford small salaries for us but already the organisation had achieved something that no other had.

A year later, in the summer of 1985 we returned to the Faroes with a team of nine people, three VW campervans and three inflatable boats. We peacefully interfered with and documented a terrible slaughter of 200 whales. The film and photographs were broadcast around the world and international pressure was on the Faroes.

Numbers taken significantly reduced and regulations were changed to eliminate the worst of the cruelty. A few years later, I was told by a Faroese Government representative that its decision to stop fin whaling could be considered our victory. It simply could not sustain the pressure on the pilot whale hunt and the fin whaling.

This unacceptable and unnecessary hunt continues to this day but a lot has changed. With the threat to human health from people consuming the meat and blubber due to the high levels of pollutants in the whales – scientifically and definitively proven by Faroese scientists, world leaders in this research – we believe it will eventually end.