It’s a long weekend here in the UK and many people will be taking this time to sit back and recharge their batteries. A lot of you may even be going to, or watching, a football match – if that’s your plan, just think about this for a moment: 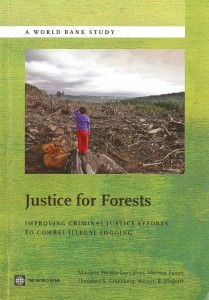 “Every two seconds, across the world, an area the size of a football field is clear cut by illegal loggers.”

This was the opening statement of a new report launched last week in Washington DC by the World Bank. Justice for Forests: Improving criminal justice efforts to combat illegal logging recognises that funds generated by illegal logging are “unregulated, untaxed and often remain in the hands of organised criminal gangs”, and that through the use of the criminal justice system, more can be done to address the complex issues of illegal logging.

It’s true, over the many years that EIA has exposed the real situation on the ground in East Asia, naming names and exposing the ‘untouchables’, that we have yet to see any real justice regarding those who continue to plunder the forests for their own gain and end up extremely wealthy and powerful, with very high-level connections to decision-makers. In fact, in some cases it’s the decision makers themselves who have managed to get to a position of power using funds from illegal logging.

In Indonesia, we have exposed various individuals who are heavily engaged in forest crimes. Abdul Rasyid and his nephew Sugianto, from Tanjung Lingga, were responsible for illegally logging Tanjung Putting National Park, in Central Kalimantan, and the kidnapping and assault of EIA and Telapak investigators. While Sugianto went to court to face assault charges, neither were ever found guilty of plundering Tanjung Putting, nor of the kidnappings.

Ali Jambi, who controlled the ramin smuggling trade and was named as one of the illegal bosses in Indonesia by the Ministry of Forestry; despite being investigated by the Indonesian police, had fled to Singapore and was conducting his illegal practice from there.

And there’s Marthen Renouw, a high-ranking police officer who built up a position of power over a period of 29 years in Papua. His authority included the city of Sorong, the main centre for the illegal logging business in the province, and he was under investigation over a series of suspicious transactions involving five bank accounts. Investigations proved Renouw had received funds from an illegal logging syndicate. Charged under anti-corruption and anti-money laundering laws, he was acquitted of all charges after the key witness against him went on the run.

As these few examples show, corruption does not just take place in the forests. The judiciary systems of many countries are no longer places where justice is found. Systemic corruption of the police, prosecutors and judges ensure those with sufficient resources can literally get away with it.

The World Bank acknowledges there are no quick fixes for combating corruption and that without an effective criminal justice system, all the current policies do not work. In most cases, we find it is those on the ground who are caught in the act of smuggling or logging who are arrested. Usually the poor or vulnerable. The main actors behind this crime remain untouched.

And while civil society plays an important role in monitoring the forests and exposing those behind the crimes, little is being done to properly address the more complex issues that demonstrate corruption. Following the money is one such act, and working in a coordinated approach between domestic and international enforcement should work. But this takes courage and a show of political will, something that can only occur when anti-corruption activists find their champions within government and are given the support needed to ensure those who are getting away with it feel the heat.

Justice for Forests outlines many productive steps in strengthening criminal justice systems but acknowledges that, without the current preventative measures taking place and support in combating corruption in the forestry sector, these alone cannot solve the complex issues of illegal logging.

Exposing those behind this crime is as important now as it was 12 years ago.