Society for Heritage and Ecological Researches

A unique initiative to raise awareness about threatened Bengal tigers and the mangrove forests they inhabit has been touring villages in India’s Sundarban. In today’s guest blog, organisers Joydip and Suchandra Kundu talk about the attention-grabbing roadshow and the success it enjoyed earlier this month. 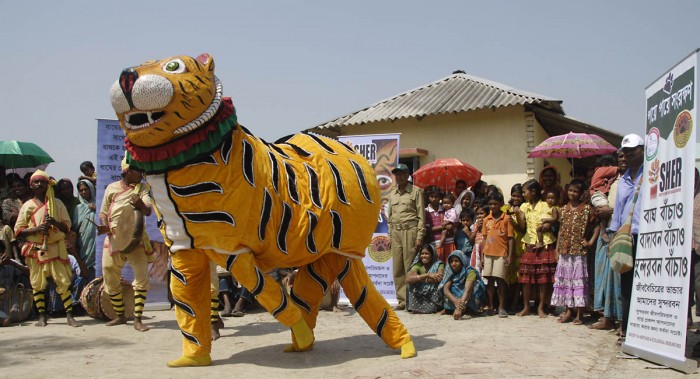 The Society for Heritage and Ecological Researches (SHER), with support from various quarters, has been instrumental in lending support to the field staff of Sundarban and, particularly, towards mitigation of tiger/human conflicts in the delta.

With proper coordination by Sundarban Biosphere & Tiger Reserve authorities, SHER has been helping to enhance coordination between villagers, field staff, local organisations and others.

Following Cyclone Aila in May 2009, there has been a significant increase in incidents when tigers have entered villages, keeping the foresters constantly on their toes. SHER’s campaigns aimed at initiating unique ways to reach out to the human habitants of the Sundarban Tiger Reserve adjacent villages, to raise their tolerance levels in extending cooperation to the authorites and to work hand-in-hand to face such situations, while at the same time gaining support for the Sundarban tigers and mangroves. 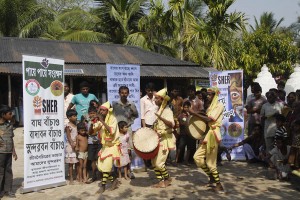 A series of edu-tainment roadshows for villages adjacent to the tiger reserve have been held over four consecutive days in collaboration with the Sundarban Biosphere Reserve. The campaign was conceived as a fusion of performance of folk artists, with pocket meetings and public interactions. A group of folk artisans from Odisha, with their traditional Bagh Naach (tiger dance), was roped-in to spread the message of conservation in a package of talks, lectures, literature, dance and music.

The programme was launched in the presence of the Range Officers of the tiger reserve at Mathurakhanda village, located opposite the Pirkhali forest area, a place known to be prone to tiger strayings. On the morning of March 4, a huge gathering greeted the team for the start of the roadshows. Apart from speeches, interactions with the locals and the distribution of leaflets, the Odishi performers helped in setting the right harmony. Local organisations instrumental in mangrove conservation and livelihood support projects covering a vast areas of the delta participated with full strength. 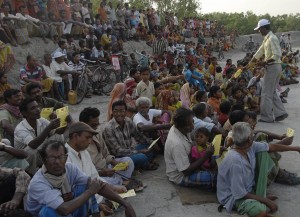 The roadshow visited 14 villages in total, with more than 10,000 people participating, from students, teachers and political officials to foresters and commoners.

Kumirmari has always been a destination known for tiger straying incidents. Before the team anchored at the jetty, the field staff of the tiger reserve arrived to encourage the team along with representatives of the Eco Development Committees. The roadshow started from the busiest marketplace on the island and concluded with speeches by local politicians and others. The results were evident with a huge crowd gathering and the event reaching out to a maximum population. Elders from the communities took the microphone to express their positive responses. School children and teachers were present, along with the local beat officer and his team.

Leaflets, sunguards, posters and stickers were distributed at all the locations, adding to the impact of the campaign. Public address systems were used in advance to announce the shows at every location, which helped to attract local people in large numbers. At the start of every show, the purpose of the initiative was explained to the assembled population. 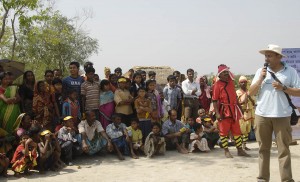 Through simple speeches, the world’s most vulnerable population of humans (from climate change) were addressed on vital issues such as the threats that they face from wind and rising waters. The campaign conveyed to them what climate change is, what is causing it and how important it is to protect the Sundarbans’ mangrove ecosystem.

The wealth of animal species were explained in terms of symbols of the natural world that we are honour-bound to maintain for the next generation. The communications not only emphasised the importance of tigers but also species such as crocodiles, sharks, dolphins, otters, deer and others. Local issues of poaching and habitat loss were specifically addressed.

The team of eight performers, assisted by a group of six others from SHER, received significant and energetic responses from the huge gatherings comprising locals and stakeholders of Sundarban living in the villages bordering the tiger reserve – students, youth, women, farmers, fishermen, local clubs and organisations.