This year, two prominent arrests in China of gangs illegally trading in tigers caused an outcry in the country and around the world. Chinese citizens are furious because China has fewer than 50 wild tigers left, yet one group in Leizhou is said to have been killing and supplying tiger products for years.

However, what is less widely known is that China actually has a licensed wildlife trade, with more than 100 companies authorised to deal in the skin products of nationally protected species, including tigers.. 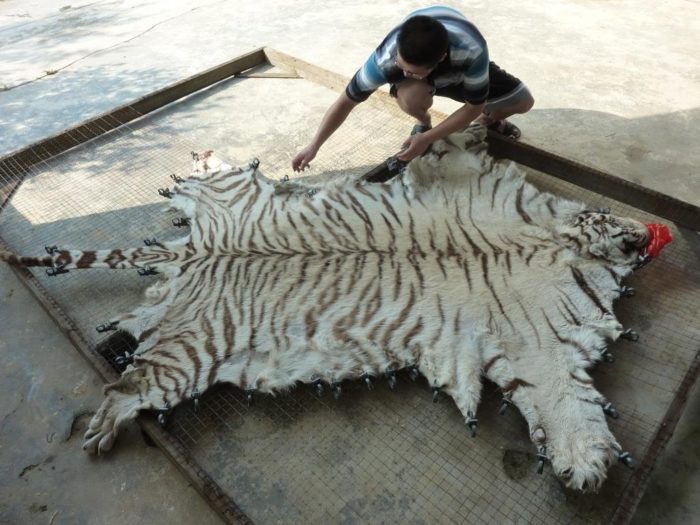 Xia Feng Craft Taxidermy Factory (Xia Feng), in An-Hui, is one of more than a dozen licensed taxidermists. Official records show Xia Feng was supplied with 40 tigers and one leopard from zoos during 2010-14 (see the records cache on EIA’s website). The finished products, high quality tiger skin rugs, are rarely offered for sale online.

In the 2013 report Hidden in Plain Sight, EIA exposed how Xia Feng’s licensed operations were a cover for illegal conduct but, despite this, the business seems to continue to operate with impunity – in January this year, Xia Feng sourced 10 tiger carcasses from zoos.

Watch EIA’s meeting with the owner of Xia Feng in this covert footage clip:
.

When EIA met the owner of Xia Feng in 2012, he offered a captive-bred Siberian tiger skin rug. The skin came with a permit but the owner admitted the tiger was not from the zoo specified on the permit. Because the real supplier was not authorised to supply tigers to taxidermists, Xia Feng has forged a partnership with Nanjing Pearl Spring Wildlife Ecological Park Ltd to facilitate the transfer. Xia Feng has sourced 26 tigers from this alliance. 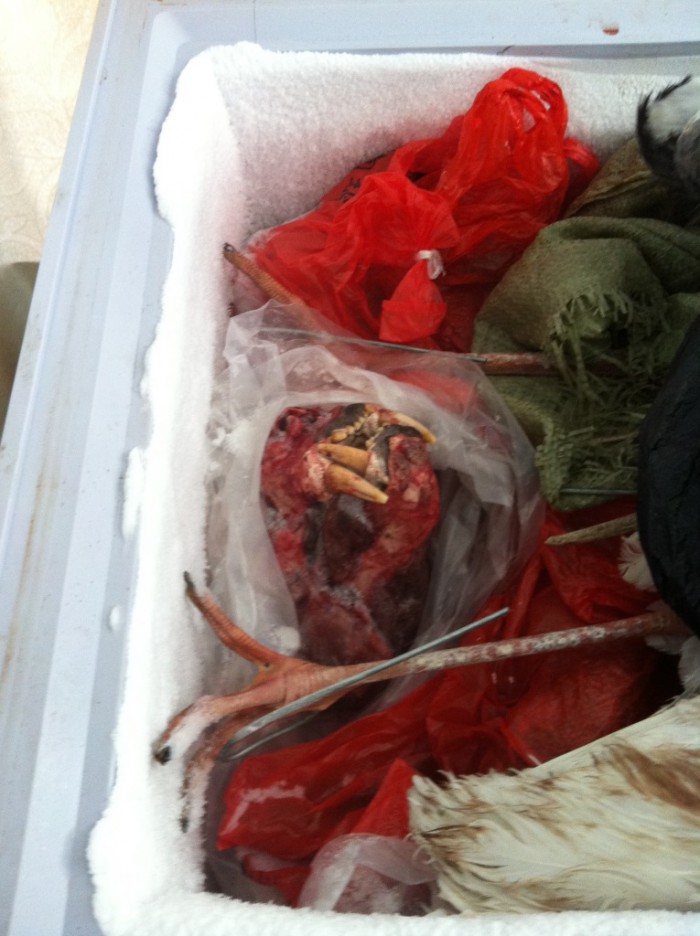 What’s particularly alarming is that Xia Feng also sought to sell the bones and meat of that tiger, which is illegal under current Chinese law. While the skin was being sold as a rug, its skeleton was offered for sale as an ingredient with which to make ‘health’ tonics (tiger bone wine). EIA was shown the head of the tiger and the owner said he had regular clients purchasing tiger bones from him.

For tigers that have died in zoos, private collections and other breeding facilities, current regulation in China requires their bones to be sealed in order to prevent them from entering trade. However, Xia Feng has been given permission to buy at least 19 tiger carcasses within just four years.

Since the State Council announced a ban on tiger bone trade in 1993, trade in bones from wild tigers has been largely restricted in China. In the wake of recent and very welcome announcements criminalising the consumption of wild animals in the country, it would be easy to interpret these combined regulations as spelling an end to all tiger trade.

However, it would be complacent to overlook the licensing scheme. Since 2003, it has authorised hundreds of companies to trade in wildlife and their products such as ivory, tiger skins, leopard taxidermies, medicines containing bear bile and the glands of the musk deer, and many others (read more about the scheme in Hidden in Plain Sight).

The role of China’s legal domestic ivory trade in stimulating demand and laundering illegal ivory has been well documented. Yet from the start, the same scheme didn’t just sanction ivory dealers but also taxidermists, drug manufacturers, fur and leather traders and many others. As one such licensee, Xia Feng exemplifies how the scheme poses serious threats to tigers and to a range of other species.

Xia Feng’s tiger rugs offer no educational value, which bluntly contradicts the reason it was granted authorisation in the first place. It is understood that Xia Feng’s purchases from the zoos were allowed because the company was to produce taxidermies for educational and scientific purposes. But the owner of Xia Feng said most of his tiger products were actually purchased by private businessmen for personal use.

“No public institutions want a tiger rug, they need a standing taxidermy; some schools may buy a fake one,” he told EIA’s undercover investigators. 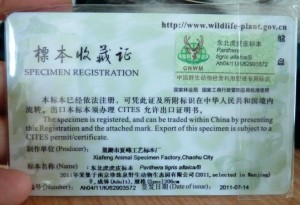 Also, Xia Feng’s interview reveals how the licensing scheme is poorly regulated and offers a serious loophole. For private buyers prepared to take the risk, Xia Feng offers a discount if the permit is returned once the tiger skin rug is behind closed doors. The cost of such permits, according to the owner of Xia Feng, includes wining and dining local officials and a lengthy waiting period. The owner said he retained the permit when a leopard skin was previously sold to a public institution since it bore little risk of inspection; the permit is now available to provide cover for trade in another skin. The owner, himself an experienced taxidermist, further said he has processed wild tiger skins which were gifts to elite individuals.

It is a trade that is clearly commercial in scale and is rife with loopholes and corruption. The response of Chinese officials in the State Forestry Administration (SFA) to EIA’s report has simply been to state that the skins of captive-bred tigers are to be used for scientific and educational purposes. Clearly, that is not what is happening and a head-in-the-sand approach is undermining all other national and international efforts to end trade in wild tigers and other threatened species.

Xia Feng is by no means an isolated case; two other licensed taxidermy businesses visited by EIA are also engaged in illegal business. An independent Chinese media report has also documented how the taxidermy industry in China has crossed the lines of legality in seek for profits.

Some authorities in China have suggested they are too under-resourced to regulate the system. But while law-makers are deliberating over the updating of criminal and wildlife laws, an end to all tiger trade – including captive-bred tigers – would be a win/win for the Chinese regulators and the protection of wildlife.