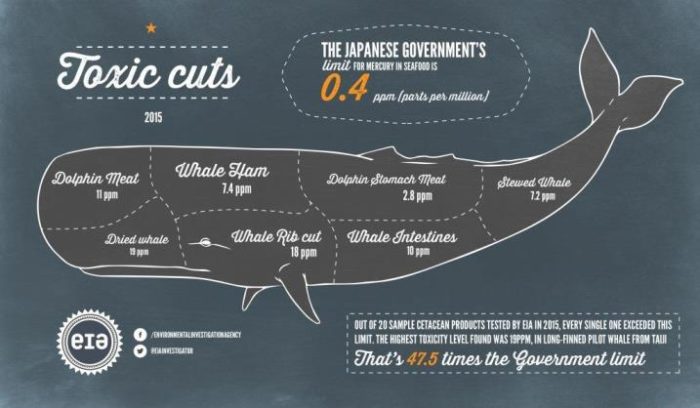 LONDON: The Government of Japan and the country’s largest online marketplace for whale and dolphin meat have been urged to stop turning a blind eye to consumer health after the latest analysis revealed unsafe mercury contamination in 100 per cent of samples tested.

The Environmental Investigation Agency (EIA) tested 13 products purchased from Yahoo! Japan – the only major online retailer to continue to profit from sales of whale and dolphin meat – and an additional seven products from Japanese supermarkets.

In one instance of dried pilot whale meat purchased from Yahoo! Japan, the mercury level was found to be 19ppm – a shocking 47.5 times the safe limit.

Releasing the results today, EIA Oceans Campaign head Clare Perry said: “Time and again, our analysis of cetacean products on sale in Japan has shown them to be riddled with mercury and other pollutants which pose serious threats to human health.

“By continuing to allow Japanese consumers to buy and eat these toxic products in ignorance of the very real risks they pose, the Government and Yahoo! Japan are utterly failing in their duty of care.

“EIA calls on both – and on all retailers of whale and dolphin products in Japan – to stop gambling with consumers’ health and to take swift and decisive action to remove them from the market.”

Some 50 per cent of the products were not labelled with the name of the cetacean species, in contravention of Japan’s labelling laws.

The full table of toxicity test results is available to view and download here.

Studies of populations that consume cetacean meat and blubber have shown that mercury and other contaminants adversely affect foetal development, including infant immune function, neural development and memory, as well as increasing the risk of developing Parkinson’s, hypertension and arteriosclerosis in adults.