LONDON: The Environmental Investigation Agency (EIA), a London-based international NGO, strongly refutes allegations concerning its recent report into illicit trade in timber between Laos and Vietnam made by a Vietnamese wood industry association and covered in a range of media outlets. 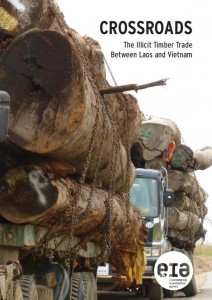 On 28 July 2011, EIA released its report entitled “Crossroads – the illicit timber trade between Laos and Vietnam” at a press conference in Bangkok. The report, based on extensive field investigations between October 2010 and May 2011, highlighted the ongoing trade in round logs between Laos and Vietnam, despite a log export ban in Laos. The findings echoed the results of an earlier investigation carried out by EIA in 2008 and published in the report “Borderlines”.

While EIA respects the right of the Vietnamese wood industry to respond to the findings in Crossroads, it believes that many of the comments contained in media reports of the VIETFORES press conference stray beyond the bounds of fair comment and veer into inaccuracies and misinformation.

The most galling accusation by VIETFORES is that EIA is somehow under pressure from unnamed countries or organisations to damage the reputation of Vietnam’s wood industry. EIA is a proudly independent NGO with no allegiance to countries or organisations. Its pioneering work on illegal logging since 1999 has involved investigations in more than a dozen countries and in no way singles out Vietnam. For instance, last year EIA released a report into log smuggling between Indonesia and China.

EIA has also strived for balance in responding to media enquiries concerning Crossroads. For example, an article in the US Global Post states: “The EIA, however, is careful to point out that most Vietnamese exports are legit.” This is hardly the sort of comment to be expected from an organisation under pressure to blacken the name of the Vietnamese wood industry.

VIETFORES also denies the charge that illicit trade in raw logs between Laos and Vietnam exists on the basis that it is licensed by the Lao government and supervised by authorities in the two countries. This claim is at odds with Lao law, which explicitly bans the export of round logs, and a host of comments made by wood traders to undercover EIA investigators. For example, the Hanoi company Nicewood, which carries out logging in Laos, said: “Laos forbids the export of round logs and square logs, but some company like us can import. Nothing is difficult if you have the money.”

EIA believes that the legal basis of Laos’ log export ban is clear and widely known among the Vietnamese wood industry. It is up to VIETFORES to publish actual proof to back up its assertion that Vietnamese imports are somehow excluded from the ban.

Comments made by VIETFORES also demonstrate a marked lack of solidarity with its counterpart associations in Laos. In February 2011, the Lao Wooden Furniture Association complained of a lack of raw materials. Factories in Laos are idle while raw logs flow into Vietnam. On this issue, VIETFORES appears to have no comment.

EIA stands by the information contained in Crossroads and repeats its call for Vietnam to respect its neighbour’s log export ban.

Julian Newman, EIA Campaigns Director, said: “Our report is based on detailed research and painstaking field investigations. Vietnamese timber traders and elements of the wood industry are profiting from the over-exploitation of forests in Laos. Rather than issue baseless denials, VIETFORES would be better employed cleaning up the part of the industry still trading in raw timber from Laos.

“There is a parallel to be drawn with the situation in Indonesia and Malaysia a decade ago. At that time, EIA exposed large-scale trade in logs from Indonesia to Peninsular Malaysia, in contravention of Indonesia’s log export ban. At first, Malaysia denied EIA’s accusations, but when further evidence was provided it amended its regulations to ban the import of logs from Indonesia. A similar step is needed from Vietnam in regard to log imports from Laos.”

A detailed rebuttal of specific claims made by VIETFORES follows:

• “They (EIA) may be under pressure from some countries or organisations who want to blacken and downgrade the prestige of Vietnam’s timber export industry”. Quote attributed to Nguyen Ton Quyen, general secretary of VIETFORES.

EIA is an independent non-governmental organisation and is beholden to no-one in the work that it carries out. Since 1999, EIA has been campaigning against illegal logging and timber smuggling. This has involved field investigations in Indonesia, Malaysia, Singapore, Thailand, China, Laos, Vietnam, Russia, Honduras, Madagascar, Europe and the US. The claim that EIA is under pressure to target Vietnam is untrue.

EIA has never received any funding from the European Environment Agency. It is in receipt of a three-year grant from the European Commission’s EuropeAid office, which was secured through an open call for proposals. This is clearly stated on the inside cover of EIA’s Crossroads report.

• “The EIA used outdated information from three years ago and the investigation was based on unofficial interviews” he (Sinh) said. The EIA staff were disguised as customers when interviewing these companies with hidden tape recorders – the Vietnamese staff did not know who they worked with, Sinh said.”

EIA’s findings outlined in Crossroads are the result of field investigations carried out between October 2010 and May 2011, not from three years ago. EIA makes it clear in the report that its investigators posed as timber buyers when meeting target companies. This method is the only way to uncover the wood trade activities of the target companies, and all of the meetings were recorded as evidence. It is nonsensical to expect EIA to carry out official interviews, given that the subject matter of the investigation was illicit activity.

• “Quyen (of VIETFORES) said that wooden products from Vietnam that had been exported to markets in the EU, US and Japan were not made from timber imported from Laos due to high prices and unsuitable production technology.”

EIA’s investigations in both 2007-08 and 2010-11 reveal that some Vietnamese wood processing companies do use raw material from Laos in products exported to the EU and US. This finding is based on meetings with the companies, observation of packaging in factories and trade data. This information is set out on pages 14 to 15 of Crossroads. The point about “unsuitable production technology” is a strange one, given that the bulk of timber entering Vietnam from Laos is in the form of raw logs.

• “The EU and the US have representative offices in Vietnam and tightly control licensing import certification … Quyen said.”

Untrue. Any exports of wooden products from Vietnam are a purely commercial matter and do not involve any import certification from either EU or US representatives in Vietnam.

• “According to the official (Sinh), the country (Vietnam) is shipping only FSC-certified wood products to the EU under strict assessment of third (party) international organisations.”

Untrue. While EIA commends Vietnam for the increasing use of certified timber, is it by no means universal in terms of exports to the EU. In its investigation, EIA found Vietnamese manufacturers exporting non-certified wood products to Italy, Poland, Greece and Finland.

• “It (EIA) had reused a photo from its 2008 report of a truck allegedly carrying illegal logs for Hoang Phat for the latest report, he (Quyen) said.”

All images in the Crossroads report were taken between October 2010 and May 2011, as proven by the digital data embedded in each image.

• “Tran Le Huy, director of Hoang Phat said his company had never used that truck. “Their accusations of us carrying illegal timber is groundless…” he said.”

On August 22, the Handicraft and Wood Industry of Ho Chi Minh City (HAWA) issued a statement in response to Crossroads, based on communications with some of the companies named in the EIA report. Regarding Hoang Phat, it states: “The company concedes it is running a transport company. In 2010-11, the company signed a contract to transport some timbers from Laos to Vietnam”.

• “Quyen also said that EIA had drawn disingenuous and invalid conclusions from their investigation. It had asked companies if they imported timber from Laos and also exported furniture to the EU and the US. If the company said yes to the two questions, EIA would conclude that the business produced furniture for the EU and US from timber imported from Laos, he said.”

This is a false representation of EIA’s findings and methods. Most of the meetings EIA investigators had with wood businesses in Vietnam lasted at least one hour, and obviously went far beyond merely asking two questions. EIA has been scrupulous in ensuring that information on Vietnamese firms using raw timber from Laos in products exported to the EU or US is based on direct statements from representatives of the companies concerned. EIA’s assertions are backed up by tape recordings of the meetings.

• “VIETFORES sent a letter to EIA last Wednesday … Quyen said. “However, we have not received any response from EIA until now,” he said.”

EIA has not received any communication from VIETFORES and, based on past experience, doubts that any such letter has been sent. After EIA released its Borderlines report in March 2008, Quyen also told the media a letter had been sent to EIA; when the letter failed to arrive, EIA sent an email to Quyen requesting a copy, but no reply was received.

1. The Environmental Investigation Agency (EIA) investigates and campaigns against environmental crime and abuses.