EIA and two other conservation organisations have filed a legal petition calling on the US Government to formally sanction China for illegally trading in critically endangered pangolins.

In US law, the Pelly Amendment provides restrictions on importation of fishery or wildlife products from countries which violate international fishery or endangered or threatened species programmes.

If our petition with the Center for Biological Diversity and International Environmental Law Project to the US Secretary of the Interior succeeds and China is certified under the Pelly Amendment, the US Government can take action against China – including banning all wildlife imports from the country.

In 1993, President Clinton used the process to certify and ban all wildlife imports from Taiwan for its rhino trade, which violated the Convention on International Trade in Endangered Species (CITES). Taiwan promptly closed its domestic rhino horn market.

Pangolins are the most heavily trafficked mammal in the world. They are consumed in China as a luxury meat and their scales are used in traditional Chinese medicine.

Spurred by the international outcry over the COVID-19 coronavirus pandemic – which potentially jumped to humans via pangolins as an intermediary host – China has announced a ban on the trade of terrestrial wildlife for consumption as food and also appeared to removed pangolins from its official pharmacopeia, a reference guide used in traditional Chinese medicine.

However, research by EIA revealed that behind the State spin, pangolin scales are still listed as an ingredient in patent medicine formulae found in the official reference book.

“The existence of a legal market for pangolin scale medicines in China is undermining the effectiveness of CITES and providing an opportunity for transnational criminal networks to profit from illegal trade,” said Chris Hamley, an EIA Senior Campaigner.

“The global illegal pangolin trade is rapidly devastating pangolin populations across Africa and Asia. This is driving corruption that undermines rule of law and contributes to weak governance and insecurity in source and transit countries. With a continued intransigence from the Chinese Government on the issue, all possible instruments should be utilised to ensure we see an end to the demand that is fueling global pangolin trafficking.” 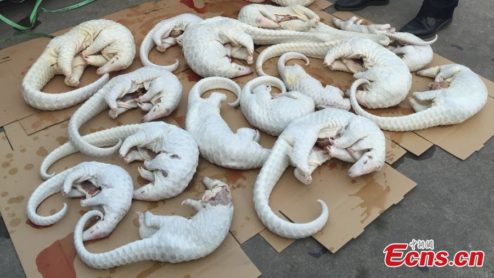