Yesterday (Tuesday) saw several African elephant range states as well as a number of ivory transit and consumer states at the African Elephant Summit in Gaborone, Botswana unanimously adopt 14 “urgent measures, to halt and reverse the trend in illegal killing of elephants and the illegal ivory trade“. 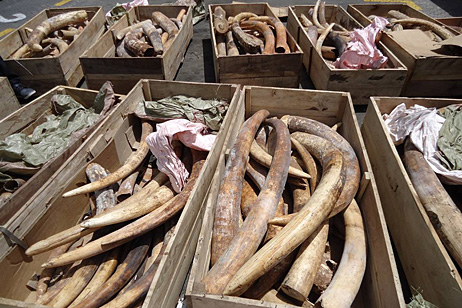 EIA is encouraged to see more commitment expressed towards specific and concrete actions to improve enforcement efforts to tackle this problem.

With at least 50,000 African elephants being killed each  year, EIA believes that the need of the hour is to ensure that these urgent measures are implemented in reality. In particular, it is crucial that where penalties for wildlife offences are insufficient, the relevant laws are strengthened and that maximum deterrent sentences for wildlife crime are imposed using a combination of laws.

Further, there must be accountability and transparency in the process, with the implicated countries accurately and regularly reporting on progress made to implement such measures.

EIA is pleased that the European Union, Germany and The Netherlands also pledged funding for the implementation of these urgent measures.

In addition, Elephants Without Borders, a charitable organisation based in Botswana which is dedicated to conserving wildlife and natural resources and a long-term ally of EIA, announced that it has received funding to conduct a pan-African aerial survey of elephant populations.