Here is a brief wrap-up of the proceedings.

There’s only one place for ivory – on elephants (c) EIAimage

The UK Ivory Act is a landmark piece of legislation, welcomed globally, which aims to close the UK’s domestic ivory market – yet 10 months have passed and the Act is yet to come into force.

Further exacerbating the delay, in March 2019, a group of antiques dealers sued the UK Government, challenging the legality of the Act.

On Wednesday this week, the UK High Court began its hearing of the law suit, marked by the chanting of protestors outside the courtroom to show their support for the Ivory Act.

Lawyers for the antiques dealers argued that the Act violates EU law by restricting the flow of ivory within the EU – ironic, given the looming Brexit deadline for the UK to leave the EU.

Further, they argued that the Act went too far and was “disproportionate” by restricting the fundamental rights to property and to conduct a business.

Next, the lawyers for the Government made their case to defend the Act, arguing that the EU law provides Member States with the power to adopt “stricter” measures in the environmental sector and that the UK Ivory Act was one such stricter domestic measure enacted in the public interest to contribute to international ongoing efforts to end poaching and ivory trafficking and to shrink ivory markets globally.

It was argued that all legal ivory markets, whether they are in the UK or abroad, now or in the future, pose a risk to elephants as they provide opportunities for laundering illegal ivory and sustain the commercial value and desirability of ivory. Thus, directly or indirectly, the UK ivory market exacerbates the risk faced by elephants in Africa and Asia.

Protestors at the London High Court

Indeed, this is also in line with in-depth EIA research and analysis which has shown that the UK is the world’s largest exporter of so-called ‘legal’ ivory. These items are exported largely to China and Japan, two countries that play a major role in global illegal ivory trade.

While China is strengthening its efforts to tackle ivory trafficking, Japan’s legal ivory market is critically flawed and the country is not only a haven for domestic illegal ivory trade but is also fuelling illegal trade in China with illegal ivory items being smuggled into China from Japan.

Further, recognising that there will be a significant impact on businesses/antique dealers, it was emphasised that the Act contains a number of exemptions to allow limited forms of legal trade.

Overall, it was a surreal experience, at times feeling as though it was completely divorced from the reality on the ground where thousands of elephants have been and continue to be killed for no other reason than the fact that human beings want to put a price tag on ivory.

“The lawyers for the antiques dealers eloquently argued in favour of the ‘value’ of ivory products,” said Suresh. “Japanese carvings, walking sticks, handles, fans etc were discussed and some items were also proudly displayed in the court room as expensive works of art …  it would have been an open-and-shut case if an elephant could have walked in and just stood there in the court room – no ivory carving in the world could be more beautiful or valuable than ivory on elephants in the wild.”

The Judge will now prepare his final judgment, taking into consideration the oral arguments made in court as well as the detailed written submissions and evidence produced by both parties.

Watch this space for updates on the final judgment! 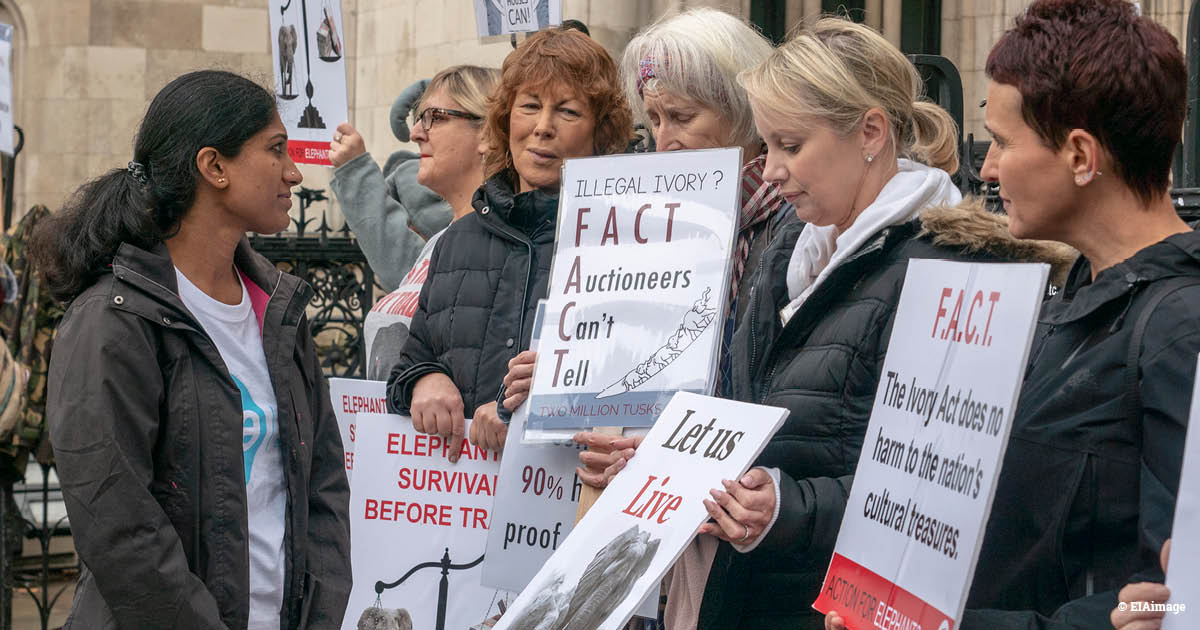 Shruti Suresh chats with protestors at the High Court 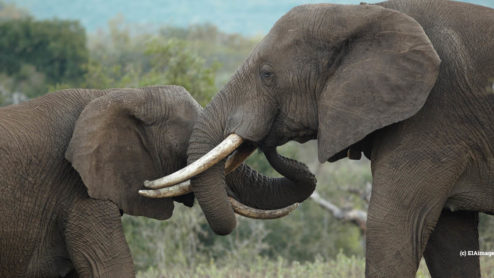