With tiger farming long pushed to the margins of the UN Convention on International Trade in Endangered Species (CITES), EIA’s Tigers Campaign is pleased to see the issue back in the spotlight and recognised as a serious threat to the future of wild tigers.

The 65th Meeting of the Standing Committee (SC65) of CITES took place last week in Geneva, Switzerland, where key outcomes for tigers and other Asian big cats included:
• SC65 adopted 16 recommendations on tigers and other Asian big cats, including some asking for very specific information on domestic measures to prohibit trade in parts and derivatives of captive-bred tigers and measures to destroy stockpiles;
• Parties were urged to tighten regulations over the keeping, breeding and use of tigers to prevent their commercial use;
• SC65 also encourages Parties developing DNA and photo identification databases for captive Asian big cats to share such information with relevant law enforcement authorities, allowing any seized specimens to be cross-checked with those databases, and to share photographs of any seized tiger skins with countries which have databases of wild tigers;
• China, India, Nepal, Myanmar and Vietnam have been asked to step-up enforcement in key border areas where there is persistent illegal international trade, and Thailand, Vietnam and Lao PDR have been urged to stop illegal trade in farmed tigers. All seven countries have been requested to report to the CITES Secretariat by June 1, 2015 to allow for the preparation of a report for the 66th meeting of the Standing Committee;
• There will be an inter-sessional working group of Parties and NGOs, chaired by China, to assess implementation of the recommendations and identify outstanding issues of concern;
• During SC65, the CITES Secretariat confirmed that Decision 14.69 – which states that tigers should not be bred for trade their parts and products – is still valid, leading several Parties such as the USA and members of the EU to persist in calling for restrictions on internal trade in tiger specimens. 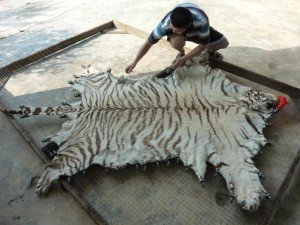 EIA Lead Campaigner Debbie Banks said: “Parties to CITES have made up for lost time and given tigers and other Asian big cats a lot more attention at this Standing Committee meeting. Given our investigation findings into the licensed trade in captive-bred tiger skins in China, we are especially delighted that domestic as well as international trade in parts and products of tigers is going to be subject to greater scrutiny.”

Serious criminality is associated with international illegal trade in tigers bred in, or trafficked through, captive operations, while the parallel legal market is perpetuating demand for tiger and other Asian big cat parts and products.

“The critical step will, of course, be the implementation of these recommendations,” added Banks. “EIA looks forward to participating in the ongoing inter-sessional working group, to be chaired by China – especially now that the country has confirmed publicly that it does not ban the use of tiger skins. Perhaps at last it will report on just how big the trade in captive-bred tiger skins really is.”

During a session on Tuesday (July 8), China described the measures it has taken on tiger conservation and stated “we do not ban skin, we ban bone”.

The statements made thereafter by China were ambiguous with regard to how tiger skins are used.

The significance of the statement “we do not ban skin, we ban bone” is that previously China has merely confirmed that it labels skins or that skins are “well-maintained”. This is the first time the country has admitted in an open meeting that it does not ban the use of tiger skins.

Following China’s statement, EIA made a formal intervention to confirm that it has shared evidence of skins being traded legally for commercial purposes with China and other Parties to CITES. China chose not to respond.