The scourge of tiger farming and the trade in parts and derivatives of captive-bred tigers continues, despite UN agreements and a commitment by the leaders of tiger range countries to end the tiger trade.

Regardless of an international commitment under a UN treaty to phase them out, tiger farms still operate in China, Thailand, Vietnam and Laos. The tigers in these operations play no conservation role – from either a genetic diversity perspective or an educational perspective; what educational value could there possibly be in a tiger pushing a pram or jumping through a hoop of fire? 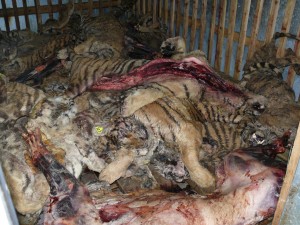 The tiger is of far greater value to humanity alive and in the wild, as an indicator of the health of the forest ecosystems it inhabits, the same forests that provide water for millions and mitigate climate change; as an indicator of good governance; as a cultural icon of power and strength, a religious figure associated with deities; and as a potential source of tourism income for local communities.

Yet to satisfy the desires of rich and powerful elite, the skins of captive-bred tigers are sold as luxury home décor, their bodies chopped up for the meat and bones. This perpetuates a demand which in turn drives the poaching of wild tigers, and of other big cats such as leopards and snow leopards as substitutes

The growing threat posed by these expanding breeding operations was recognised by international non-government organisations and concerned governments way back in 2005, when the International Tiger Coalition set out the arguments as to why tiger farming is a threat to wild tigers. 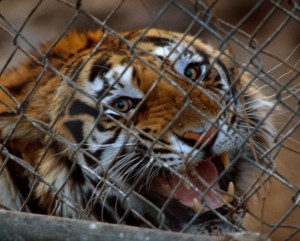 In 2007, the Parties to the UN Convention on International Trade in Endangered Species (CITES) decided that tigers should not be bred for the trade in their parts and derivatives, including domestic trade, and that tiger farms should effectively be phased out.

In 2010, the leaders of tiger range countries committed to double the population of wild tigers and to end tiger trade. However, they have failed to address the threats posed by tiger farming.

Watch this space for updates on tiger farming and how you can help – and please start by sharing this film as widely as you can!