The plastic packaging produced by supermarkets in the UK has risen to more than 900,000 tonnes a year – despite public commitments to cut down.

Today we release, with partner Greenpeace, the new report Checking Out on Plastics II: Breakthroughs and backtracking from supermarkets, revealing that seven of the top 10 supermarkets had increased the plastic packaging they use, also known as their ‘plastic footprint’.

Only Waitrose, Tesco and Sainsbury’s have managed to achieve small reductions.

Also alarming has been a steep rise in sales of so-called ‘bags for life’, with millions of shoppers purchasing them as a single-use option even though they contain far more plastic than conventional single-use carriers.

In 2019, 10 supermarkets representing 94.4 per cent of the grocery retail market reported selling an astonishing 1.5 billion bags for life, up by about 25 per cent on last year based on market share. Iceland saw sales of bags for life rise tenfold, from 3.5 million to 34 million.

In real terms, 1.5 billion bags for life sold in the past year represents about 54 per household in the UK – or a staggering 22 bags each per man, woman and child.

We’re urging supermarkets to work towards eliminating single-use plastic altogether by offering packaging-free products or switching to reusable and refillable packaging. False solutions to the plastic pollution crisis – such as swapping plastic for cardboard or simply making plastic thinner – are unacceptable.

EIA Ocean Campaigner Juliet Phillips said: “It’s shocking to see that despite unprecedented awareness of the pollution crisis, the amount of single-use plastic used by the UK’s biggest supermarkets has actually increased in the past year.

“Our survey shows that grocery retailers need to tighten up targets to drive real reductions in single-use packaging and items. We need to address our throwaway culture at root through systems change, not materials change – substituting one single-use material for another is not the solution.”

The survey revealed the big brands supplying supermarkets were a driving factor behind the rise in plastic packaging, indicating supermarkets had failed to compel suppliers to take action.

Only Tesco gave suppliers an ultimatum to cut excessive plastic or have products delisted – and we think the other supermarket chains should follow suit.

Another factor in the rising volume of plastic packaging was that supermarkets which saw their sales grow last year failed to cut plastic along the way, meaning that by selling more goods they inevitably sold more plastic too.

Key findings from Checking Out on Plastics II include:

Waitrose scored highly because it cut the amount of plastic packaging used and is looking to scale-up  innovative trials for packaging-free refill stations for products such as coffee, rice, pasta, wine and detergent.

Morrisons became the first retailer to set a quantified target to increase reusable and refillable packaging. It also started its own refill trials and made loose and refillable ranges 10 per cent cheaper than packaged counterparts. 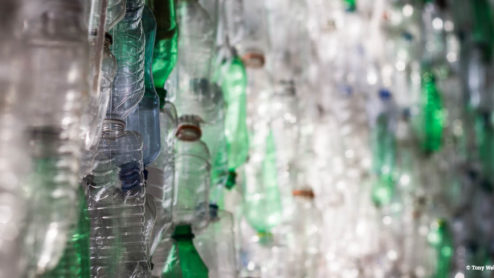 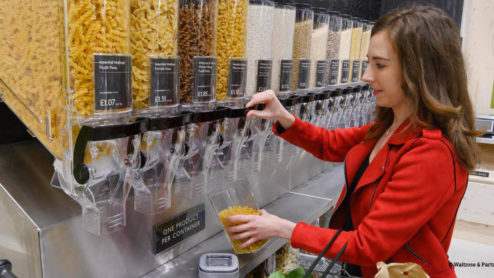