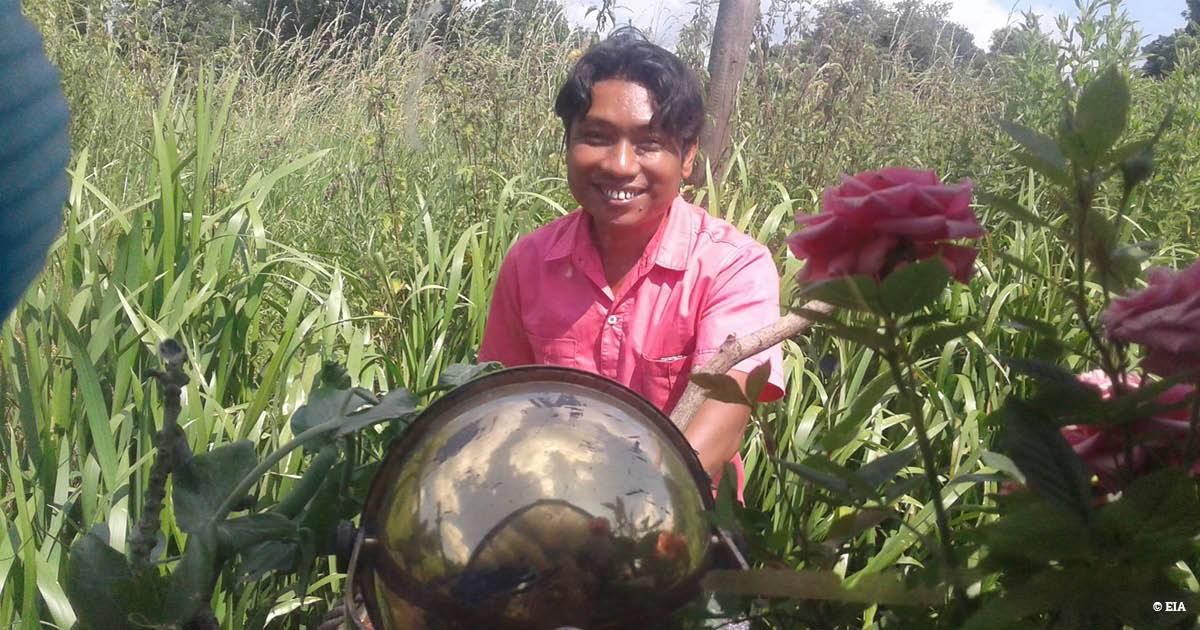 We are appalled to learn that respected forests and rights defender and democracy advocate Kyaw Min Htut has been arrested and detained by the junta in Myanmar.

Police reports obtained by EIA state he was arrested under the country’s Anti-Terrorist Act, Article 50, alleging he supported and gave financial help to groups classified as terrorists by the junta.

Faith Doherty, EIA Forests Campaigns Leader, said: “Kyaw Min Htut is a decent, humane and compassionate family man who does not deserve to be abducted by the authorities and held on trumped up, farcical charges.

“EIA is deeply concerned for his wellbeing and that of his family at this time – and, ultimately, we fear for his life.”

EIA understands Kyaw Minn Htut, his younger brother Kyaw Minn Aung and his uncle U Min Min were arrested in the latter’s home at about 3pm on Monday (06 September) by soldiers in Nandawon Ward, Monya township, Sagaing Region.

His wife Daw Khin Saw Hlaing and their two-year-old son Khant Lin had both been arrested, detained and questioned by the military the day before.

Following the coup of 01 February this year, Kyaw Minn Htut felt he had no option but to leave his family home to ensure his own security and that of his family.

Police raided his house on 23 August but were unable to locate him. Afterwards, according to local sources, clear instructions were circulated to arrest him and detain his family members if he was not found; for this reason. In light of this, his wife and child were relocated on 31 August, but were captured by the military soon afterwards.

Doherty said: “He has been a clear, strong voice tirelessly championing forest protection and rights for many years as Myanmar took its first tentative steps towards democracy and credible forest governance, in particular promoting accountability of the extraction of natural resources for the benefit of local communities.

“He has always bravely worked for what is right, despite the risks to his life.”

Last year, Kyaw Minn Htut sued a Member of Parliament, U Maung Myint, from the military-backed Union Solidarity and Development Party, over the use of hate speech in his election campaigns.

Kyaw Minn Htut was subsequently imprisoned, although he was released on bail in December 2020, and Doherty fears his arrest could be an act of vengeance by the junta.

She added: “We have a moment here to ensure that the international community steps up to ensure that those responsible for Kyaw Min Htut’s life know that the world’s eyes are on them. There will be accountability for his life.”

We demand that Kyaw Min Htut and his family be immediately released and all charges dropped and that the junta cease the harassment, arbitrary detention and ongoing violations of human rights being committed against rights defenders in Myanmar.

• This statement is also formally supported by the following organisations: