The escalating international criminal trade in ivory and rhino horn is well documented and, unfortunately, has seldom been out of the headlines in recent years. 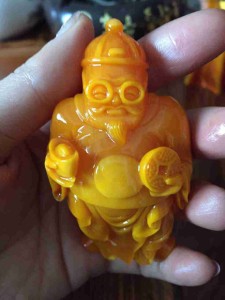 Significantly less well known is the exploitation and trafficking of another product derived from a critically endangered species, often commanding black market prices up to five times higher than ivory – the carved beaks of helmeted hornbills.

EIA has been monitoring trade in ivory and rhino horn for the past two decades, from gathering intelligence via face-to-face conversations with traders in Africa and Asia to monitoring the ever-growing online sales.

Criminals have not been slow in transitioning into the 21st century and adopting new technology. Just as they had to learn the etiquette needed to engage traders face on, EIA covert investigators have had to learn the coded jargon used to communicate with online suppliers, such as ‘black’ for rhino horn and ‘white’ for ivory.

In recent years, another colour – ‘red’ – has become increasingly prominent in trade; taking its origins from its Chinese name, hedinghong (hong = red), this ‘red’ represents the beaks of helmeted hornbill birds.

As with ivory and rhino horn, the main consumer market for helmeted hornbill beaks is China. They are traded and processed through the same carving industries in China and sold in shops as luxury products, namely jewellery and decorative ornaments. At RMB40 per gram, it commands an estimated five times the average price of black market ivory in weight. With the growing wealth of Chinese consumers, helmeted hornbill beak products have become increasingly popular, so much so that ‘red’ has significantly elevated as a status symbol to its ‘black’ and ‘white’ counterparts. 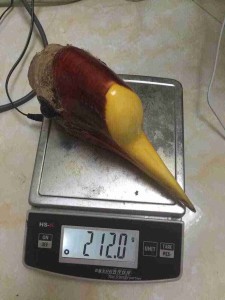 With a wingspan about 1.7m, the helmeted hornbill is a large bird inhabiting the South-East Asia forests of Sumatra and Borneo. The species generally occurs in primary semi-evergreen and evergreen lowland forests up to 1,500m above sea level. Unlike other hornbills, the helmeted hornbill is sedentary in range and territorial in behaviour. Its most distinctive physical feature is the unique casque, or helmet, above its red/yellow beak.

Populations have been in serious decline due to a combination of habitat destruction and poaching, with the Convention on International Trade in Endangered Species listing the species on Appendix I since 1975.

Yet despite its critically threatened status, little consideration has been given the helmeted hornbill. With much more attention focused on the trades in ivory and rhino horn, the trade in hornbill beak products has largely gone unnoticed and unhindered. Even on the consumer end, some buyers remain ignorant of the reality of helmeted hornbill products – what they are, where they come from, even that they derive from a living animal.

An EIA undercover investigator who monitors the trade, but who cannot be identified for security reasons, added: “One thing is for sure, alongside the ‘black’ and ‘white’ products in trade that EIA regularly monitors, the volume of ‘red’ products in trade has become widespread in recent years and that can only be a profoundly worrying sign for these majestic birds.” 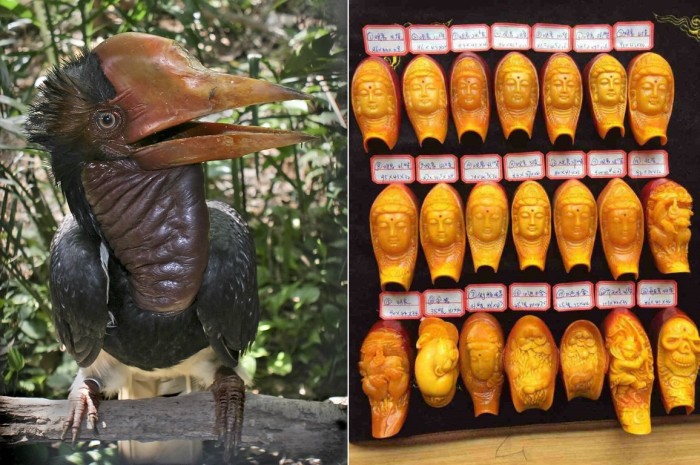