EIA and other concerned international and national organisations are calling on UK Prime Minister David Cameron to raise the issue of tiger trade with China’s President Xi Jinping during his visit next week.

With global attention focused on the poaching and trafficking crisis sweeping across Africa, threatening the survival of an estimated 420,000 elephants and 25,000 rhinos, the trade threat facing wildlife in Asia has received less attention. Given that there are fewer than 3,200 wild tigers remaining across Asia, the organisations have appealed to Prime Minister Cameron to ensure that they too urgently receive the highest levels of political and financial investment to end the demand that is making them worth more dead than alive.

The UK has played a leadership role in the fight against illegal wildlife trade by convening the London Illegal Wildlife Trade Conference in February 2014 and supporting Botswana with the follow-up meeting in 2015. Along with the UK’s considerable aid under the IWT Challenge Fund, this has helped ensure that the issue of illegal wildlife trade in general has remained an important element of high-level international dialogue and action.

While congratulating the UK on its leadership in tackling illegal wildlife trade at the international level, the organisations have expressed serious concern about the lack of political will to address the issue of tiger trade, which appears to have been overshadowed by the emphasis on illegal wildlife trade from Africa to Asia.

One of the most critical threats to the survival of wild tigers is trade in their meat, skins and bones to satisfy demand driven by wealth rather than health – for high-status food, drink, home décor and even investment assets. This demand is fuelled by a marked increase in tiger farms in China, Laos, Thailand and Vietnam where tigers are intensively bred for trade in their parts and products. China alone claims to house more than 5,000 tigers on farms.

Tiger farm investors continue to push hard for full legalisation of trade in tiger bones – the very trade China banned in 1993 because it threatened the survival of wild tigers. If trade were legalised, it would unleash a devastating demand that could quickly wipe out the last wild tigers as the bones of wild tigers are far more valuable than those from captive tigers.

In order to ensure that tiger conservation remains a priority for the international community and to end tiger farming and tiger trade, the organisations hope Prime Minister Cameron will raise these issues with President Xi next week.

Zero poaching of tigers can only be achieved when there is zero demand. The UK should continue its leadership in tackling illegal wildlife trade by seeking an end to tiger farming in Asia.

How you can help 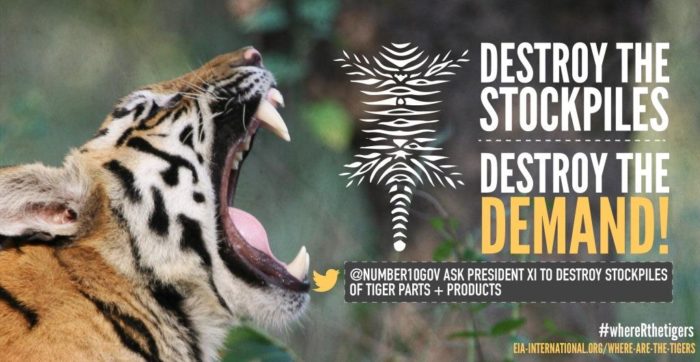 For more information on tiger farms and tiger trade visit our website.