The map provides a glimpse into the illegal rhino horn trade since 2006, including incidents of seizures and thefts of rhino horn around the world, along with convictions relating to rhino horn trade.

The data on the map is derived from publicly available sources including news media, government reports and papers from NGOs and academics. This is not an exhaustive data set and likely represents only a small fraction of the true scale of illegal trade.

The map depicts 583 incidents in which rhino horn was seized from illegal trade since 2006, involving almost five tonnes of horn – equivalent to about 1,770 individual horns.

Looking into the seizure data, we can see that recent years have seen no let-up in the crisis, with more rhino horn seized in 2017 than any previous year. 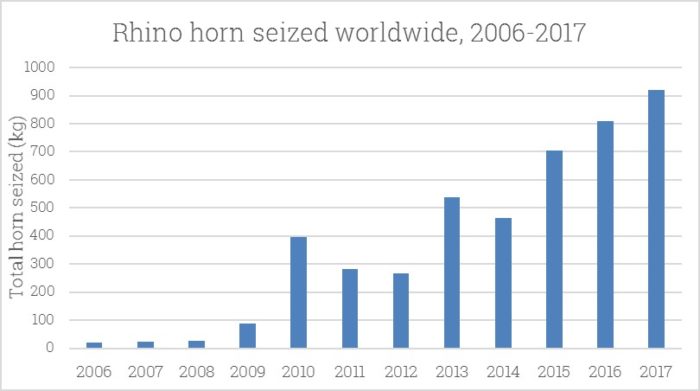 Publicly reported seizure data is far from a perfect data set with which to analyse illegal trade – efforts in both making seizures and reporting them vary widely and increased seizures may indicate improved enforcement rather than a worsening situation.

Nonetheless, taken in tandem with rhino poaching data – with more than 1,000 rhinos killed in South Africa alone every year since 2013 – it is clear that we are still in the midst of a crisis.

The map offers some insight into important aspects of the global rhino horn trade. For example, Chinese and Vietnamese nationals have been implicated in a striking number of seizures in Africa and in countries along transit routes. These cases – circled in red and black on the map, respectively – indicate the extent to which Chinese and Vietnamese organised criminal syndicates are heavily involved in the global illegal rhino horn trade, from the sourcing of poached rhino horn, through the trafficking to Asia and into consumer markets.

China and Vietnam are also by far the biggest consumer markets for rhino horn. It is crucial that the governments of these countries both invest in targeted demand reduction efforts at home, including prosecution of traders and buyers, and work with enforcement agencies in other countries to investigate and prosecute Chinese and Vietnamese syndicates operating the global trade.

While conversations around the illegal rhino horn trade tend to focus on trade from Africa, Asia’s own rhino populations, already small and fragmented, are facing severe poaching pressure from the same demand markets. The map depicts 56 seizure incidents in India and 28 in Nepal, including 10 in the two countries in the past year alone.

New incidents included in the map hint at some positive developments. For example, the past year has seen seizures of rhino horn in Laos and Angola, countries long implicated in illegal trade of endangered wildlife but in which enforcement has been sorely lacking to date.

While these first seizures are a positive step, they must be followed up by further investigations, seizures, prosecutions and deterrent sentencing in order to effectively disrupt the trade.

Much more information on specific incidents is available by exploring the interactive map, including trade routes, methods of concealment and sentencing.

The dataset behind the map is available for research and analysis on request from ukinfo[at]eia-international.org. EIA would like to thank TRAFFIC for additional cases included in the dataset.