This is why we march on Friday, October 4 – to stop one of the world’s most iconic wild animals from becoming a permanent victim of human greed and vanity.

Elephants are currently being slaughtered for their ivory at a rate not seen in decades, their homes in Africa and Asia transformed into bloody killing fields to supply the market demand for everything from elaborate carvings to trinkets and chopsticks. 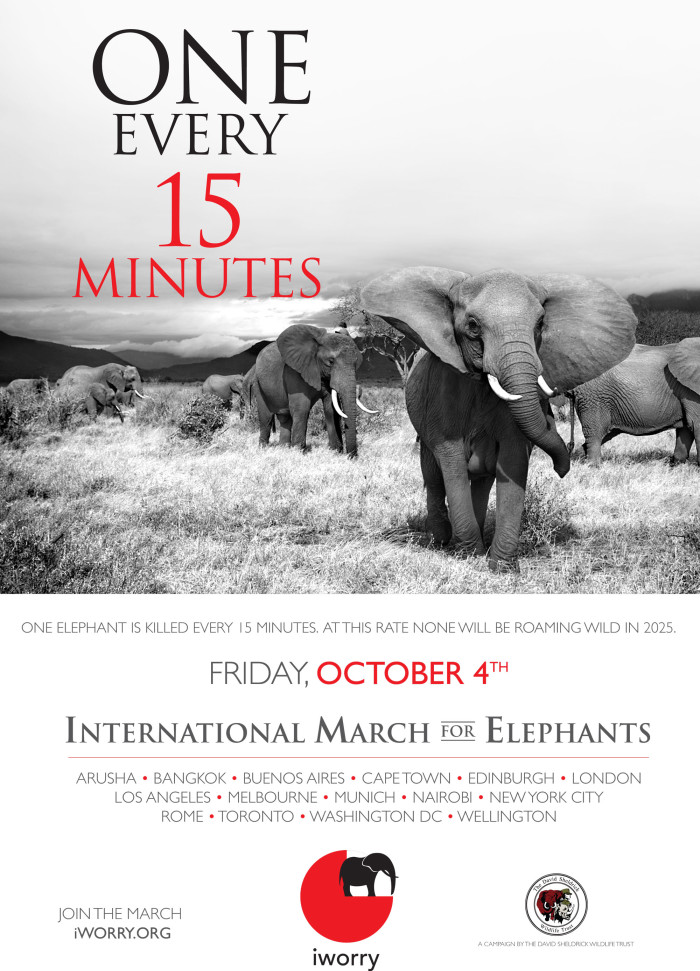 The London-based Environmental Investigation Agency (EIA) is actively supporting and participating in the International March for Elephants tomorrow (October 4), organised by our friends at the David Sheldrick Wildlife Trust (DSWT) through its iworry campaign.

Official marches will be held in London and in 13 others cities around the world (click here for details); following the recent terrorist attack, the planned march in Nairobi has been replaced by a vigil.

EIA is proud to have played a key role in securing the 1989 international ban on ivory – a ban which did much to significantly reduce poaching and allow elephant populations to cover, but a ban drastically undermined by subsequent decisions taken by Parties to the Convention on International Trade in Endangered Species (CITES) to allow two so-called ‘one-off’ sales of stockpiled ivory to China and Japan.

These sales proved to be a catastrophe for elephants, confusing consumers as to the legitimacy of ivory, stimulating new and wider demand, and providing the perfect cover behind which to launder black market poached ivory; EIA’s own field investigations in China indicate that the illegal trade is totally out of control, with up to 90 per cent of ivory available on the ‘legal’ market derived from illegal sources.

EIA Executive Director Mary Rice will be one of the featured speakers addressing the rally at the climax of the London march and, afterwards, will join other senior campaigners to deliver a letter to the Government at 10 Downing Street which calls for stricter penalties and urgent global change.

“The decision to allow CITES-sanctioned ivory auctions and a limited ‘legal’ trade has been an unmitigated disaster for elephant populations,” said Mary.

“The vast majority of seizures of smuggled ivory are destined for China, the black market there is flourishing, and the State’s own profiteering on ivory it bought at auction has allowed highly organised criminal syndicates to cash in by supplying poached ivory to undercut the artificially inflated prices of the ‘legal’ supply.

“All governments which supported China’s bid to become a CITES Approved Buyer must accept how misguided that decision was and introduce clear polices to firmly oppose all future proposed stockpile auctions and to bring all pressure to bear to end the ivory trade everywhere.”

In addition to the official marches, the iworry day of action has inspired more than 20 other events around the world.

Those unable to get to one of the marches can still participate via DSWT’s digital march which allows you to show your support and add to the weight of numbers demanding action.

Wherever you are in the world and whatever you’re doing tomorrow (Friday), please get involved by joining one of the marches or signing up online.

This is a key opportunity to grab the attention of world leaders and let them know that time is short and action needed now to stamp out the ivory trade once and for all.