The fin whaling season has once again come to an end in Iceland, this year with 137 endangered fin whales slaughtered for profit.

In September, the Environmental Investigation Agency ( EIA), Animal Welfare Institute (AWI) and Whale and Dolphin Conservation (WDC) released a joint report Slayed in Iceland and film ahead of a meeting of the International Whaling Commission (IWC), exposing the scale of the hunt and overseas trade as well as the financial and logistical links between the whalers and some of Iceland’s largest companies. 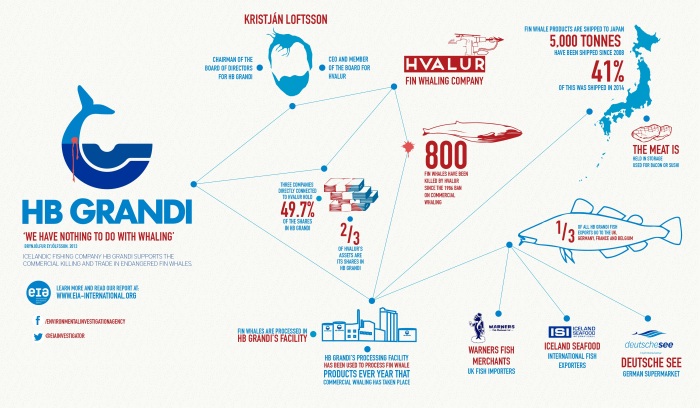 .As the IWC meeting opened on September 15 in Slovenia, 35 governments delivered a formal diplomatic protest known as a démarche to the Icelandic Government, calling on it to stop whaling and end all trade in fin and minke whales.

On September 17, nine Latin American governments participating in the IWC meeting added their support to the call for an end to Iceland’s whaling.

Earlier this year, we wrote to 47 pan-European retailers, wholesalers and seafood brands asking them to conduct a full and transparent audit of their seafood supply chain to guarantee they were not purchasing seafood with links to fin whaling, including fish from third-party agents and/or processors, and to confirm whether they have a policy opposing commercial whaling and trade in whale products.

Retailers currently purchasing seafood from HB Grandi or one of its subsidiaries were requested not to renew existing contracts and to inform HB Grandi (or subsidiary) of this decision.

While audits are still underway, the vast majority of retailers who have responded so far do not source from HB Grandi and most have a clear policy against commercial whaling. 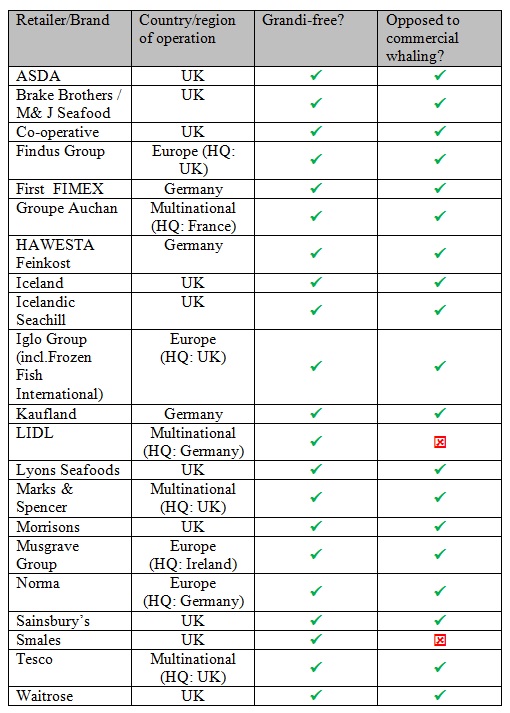 For more on our partner campaign in the US, you can find information here

In 2013, HB Grandi Marketing Manager Brynjolfur Eyjolfsson stated: “We have nothing to do with whaling.”

The reality is that HB Grandi has been, and continues to be, deeply involved in the bloody business of slaughtering endangered whales:

HB Grandi recently became a publicly traded company on the Nordic NASDAQ stock exchange. With retailer and public opinion so firmly opposed, it is high time that HB Grandi looks to the bigger picture and pressures Hvalur to cease whaling and all international trade in whale products, given the significant threat to HB Grandi’s business and international reputation.

Please help us to pressure HB Grandi to do the right thing – protest directly to the company and ask it to use its influence to end Hvalur’s whaling and, if it refuses, to formally sever all business links to the whaler.

You can compose your own letter or use the template we’ve provided below:

I am deeply concerned to learn that your company, HB Grandi, is supporting the slaughter of endangered and internationally protected fin whales via its close connections to the Hvalur whaling company. I respectfully request that your company uses its influence to call on Hvalur to cease whaling.

I also wish to inform you that I will be asking my local supermarkets if they sell any HB Grandi products, as I do not wish to buy from companies associated with the killing of whales.

HB Grandi is a company with international reach and the responsibilities that such status entails. I would hope to find that you share my view that it is unacceptable for your company to continue to associate with practices which are driving a protected and iconic species closer to extinction.

Key businesses sourcing from HB Grandi include Iceland Seafood International and Warners Fish Merchants – write to politely ask them to use their connections to pressure Hvalur to quit whaling:

I am deeply concerned to learn that your company is indirectly supporting the slaughter of endangered and internationally protected fin whales via your purchases of Icelandic seafood from HB Grandi. HB Grandi has allowed meat from endangered fin whales to be processed in one of its facilities, and is also tied to the Hvalur whaling company via a complex web of shareholdings.

Like the majority of consumers, I do not wish to buy from companies associated with the killing of a protected species and I will be asking my local supermarkets and restaurants if they sell any HB Grandi products.

I would hope that you share my view that it is unacceptable for your company to continue to support corporations whose practices are driving a protected and iconic species closer to extinction, and I call on you to make a commitment against purchasing seafood from companies linked directly or indirectly to Iceland’s whaling industry.

((Your name here))
Thank-you for adding your voice to our campaign.