The Government of Indonesia has been urged to renew its three-year ban on converting its Forest Estate to new palm oil plantations amid mounting fears that it may abandon it.

The Palm Oil Moratorium was implemented in 2018 as a response to growing international concerns about the rising levels of deforestation due to palm oil cultivation.

It should also revise the Indonesian Sustainable Palm Oil (ISPO) certification scheme to ensure it is not undermined by new legislation brought in last year to stimulate the pandemic-hit economy. 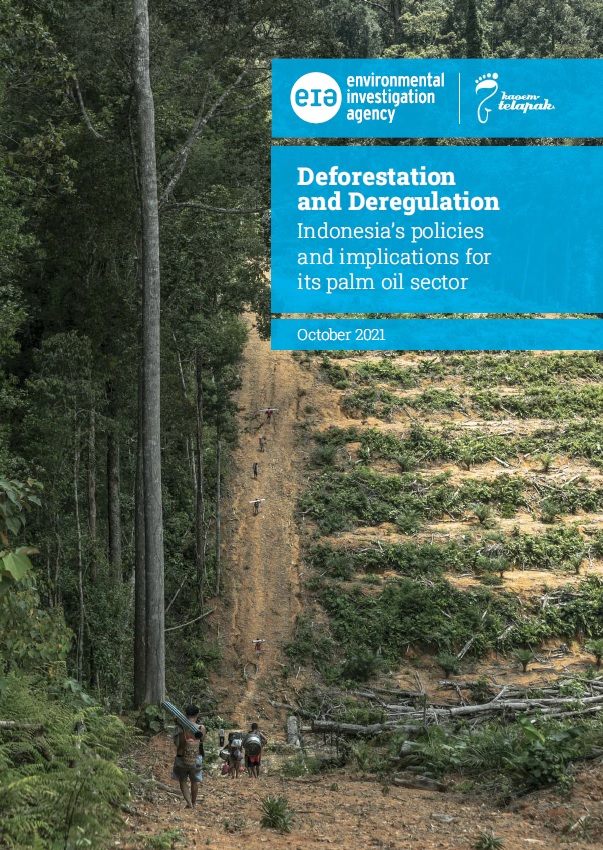 Siobhan Pearce, EIA Forests Campaigner (Palm Oil), said: “In 2020, Indonesia reported one of its lowest rates of net deforestation – 115,459 hectares, according to Government figures – and, although the true extent of deforestation is still up for debate, it’s evidently a move in the right direction.

“However, we do have grave concerns that this trajectory could be seriously undermined by Indonesia’s controversial new Omnibus law – the Job Creation Bill (UUCK) – which potentially threatens social and environmental policies for the sake of promoting investment and development.”

Deforestation and Deregulation analyses the impact and effectiveness of various pieces of legislation concerning the palm oil sector and, while finding some good, concludes that much more needs to be done to safeguard the country’s remaining forest from conversion for cash crops, especially palm oil.

The Palm Oil Moratorium was enacted in 2018 for three years to require the evaluation of current palm oil permits and halt the issuance of new permits in Indonesia’s Forest Estate, that land designated to remain natural forest.

However, an estimated 3.37 million ha of palm oil concessions are still situated within the Forest Estate area, with much of the forested land yet to be cleared. It was hoped the moratorium would review all these areas and any violations in the permitting process but, after nearly three years, the implementation of the ban and its effectiveness are unclear due to a lack of transparency and coordination.

West Papua is the only province to have completed permit evaluation, where it was found that 12 out of 24 palm oil companies did not have the required permits to operate; local government is beginning to revoke improper plantation permits in this region.

Pearce said: “The moratorium has been a useful tool for curbing the worst excesses of palm oil expansion, but this is not the time to end it. We strongly urge the Government of Indonesia to renew its ban on plantations in areas of natural forest and believe it should be upgraded to the level of Presidential Decree to make it a binding legal requirement.”

The report also found much work needs to be done to ensure credibility is achieved in the ISPO certification scheme, first enacted in 2011.

Although improvements were made to the ISPO scheme last year, it remains based on the prevailing laws and regulations in Indonesia and as such is only as good as those laws and their enforcement – and both have been found to have serious inadequacies.

One of its major failings is its low uptake, with only 38 per cent of industrial concessions now certified, despite the fact all companies were meant to be certified by 2014. Additionally, violations by palm oil companies remain commonplace; in 2019, Indonesia’s Audit Board found that 81 per cent of palm oil plantations have illegalities.

EIA investigators assessing two palm oil concessions in West Kalimantan in 2021 found irregularities in the permitting process, with one company operating illegally in the Forest Estate and ongoing conflict with communities.

Pearce added: “These kinds of violations, as well corruption, being prevalent in the palm oil sector inevitably lead to low confidence that governance has improved.

“If anything, Indonesia’s Government should be stepping up its game to achieve credibility in its claims of palm oil sustainability – and that means keeping its foot off the brake and continuing to improve meaningful, robust legislation for the sector.” 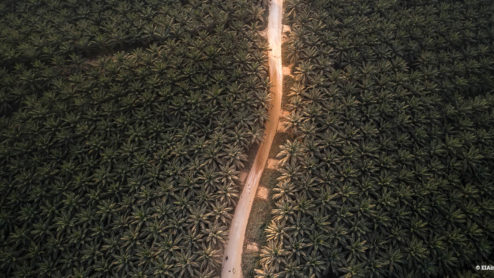