Consumers around the world are still unable to have confidence in claims of ‘sustainable’ palm oil being used in the products they buy.

The Roundtable on Sustainable Palm Oil (RSPO) is one of the world’s most well-known certification schemes – and yet its seal of approval lacks credibility as its members continue to be exposed for violations of the body’s own standard.

Notably, in 2020 multiple RSPO companies have again been alleged to have violated human rights. 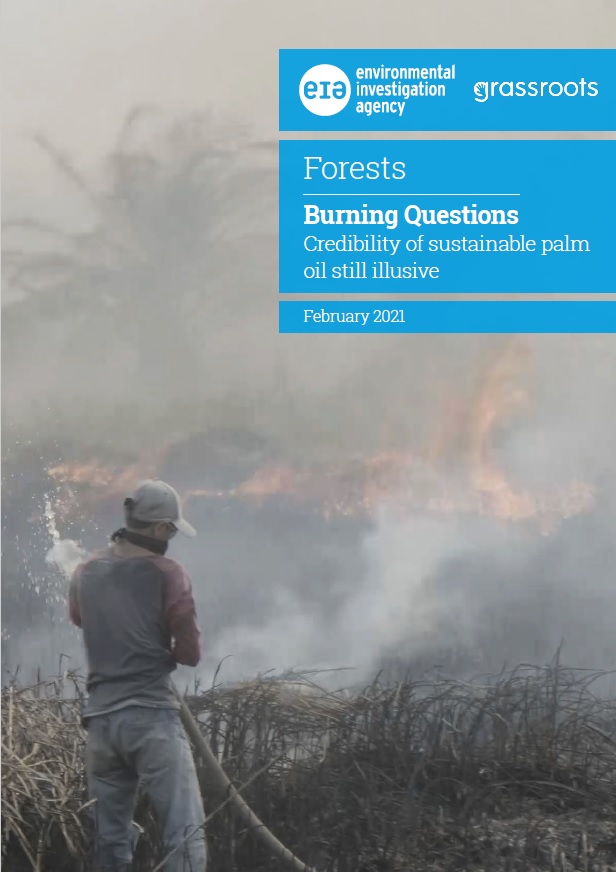 In our new report Burning Questions – Credibility of sustainable palm oil still illusive, we and Malaysian partner Grassroots acknowledge that although 2020 saw the RSPO’s Assurance Standing Committee (ASC) again take up the task of trying to improve assurance, it has yet to complete any major tasks which would address long-standing concerns about the production of palm oil under the RSPO.

Palm oil is a vegetable oil found in a huge array of products from shampoos to foodstuffs, but its production has been consistently linked to rainforest destruction, human rights abuses and contributing to the climate crisis.

To qualify for RSPO endorsement and use its logo, which certifies that a product has been produced under its sustainability criteria, palm oil growers have to meet a raft of strict rules in its operations and production.

EIA Forests Campaigner Siobhan Pearce said: “The RSPO’s assurance system is supposed to oversee the process of verifying that palm oil has been sustainably produced but there are, and continue to be, major concerns.

“The RSPO’s badge of approval is enabling greenwashing, a tactic whereby consumers are led to believe products are sustainable and good for the environment when in reality they are not.

“Despite various actions over the past five years, there is little to inspire optimism that the RSPO  will fix the problems. The ASC and RSPO must act faster, get to the root of the problems and put in place changes that will truly address them.”

Andrew Ng, of Grassroots, added: “New and existing human rights and forest-linked conflicts associated with RSPO certificate holders shows that, despite the efforts of the ASC, the sustainable palm oil claim is still unreliable.”

Among the RSPO’s nearly 5,000 members are some of the world’s biggest multinationals, such Unilever, Procter & Gamble, Kellogg’s and Johnson & Johnson.

It is clear certification schemes such as the RSPO still need to improve to provide confidence in their claims. With both the UK and EU set to introduce new laws to address illegalities, land rights and deforestation in supply chains, this is even more apparent.