“Perhaps the single most successful international agreement to date has been the Montreal Protocol” – Kofi Annan, Former Secretary General of the United Nations

The Montreal Protocol on Substances that Deplete the Ozone Layer is widely recognised as the world’s most successful multilateral environmental agreement.

In 2016, it made history yet again with the adoption of the Kigali Amendment which will avoid almost a half a degree of warming by the end of the century through the gradual elimination of climate-damaging hydrofluorocarbons (HFCs), a super greenhouse gas widely used in refrigeration and air conditioning.

In 1974, Frank Sherwood Rowland and Mario Molina published ground-breaking research which showed that the breakdown of chlorofluorocarbons (CFCs) emissions in the atmosphere could cause ozone depletion.

Initially disputed by CFC producers such as Dupont as “a science fiction tale”, the hypothesis was proven by scientific research over the following decade, not least by the discovery of the Antarctic ozone hole in 1985 by British Antarctic Survey scientists Joe Farman, Brian Gardiner and Jonathan Shanklin.

The discovery of the ozone hole galvanised the already growing pressure to address ozone depleting substances, and 18 months later the Montreal Protocol was born.

On UN International Day for the Preservation of the Ozone Layer (September 16, 2017), we celebrate 30 years of the Montreal Protocol with a glimpse into some of its milestone achievements during the past three decades, and EIA’s role in supporting them. 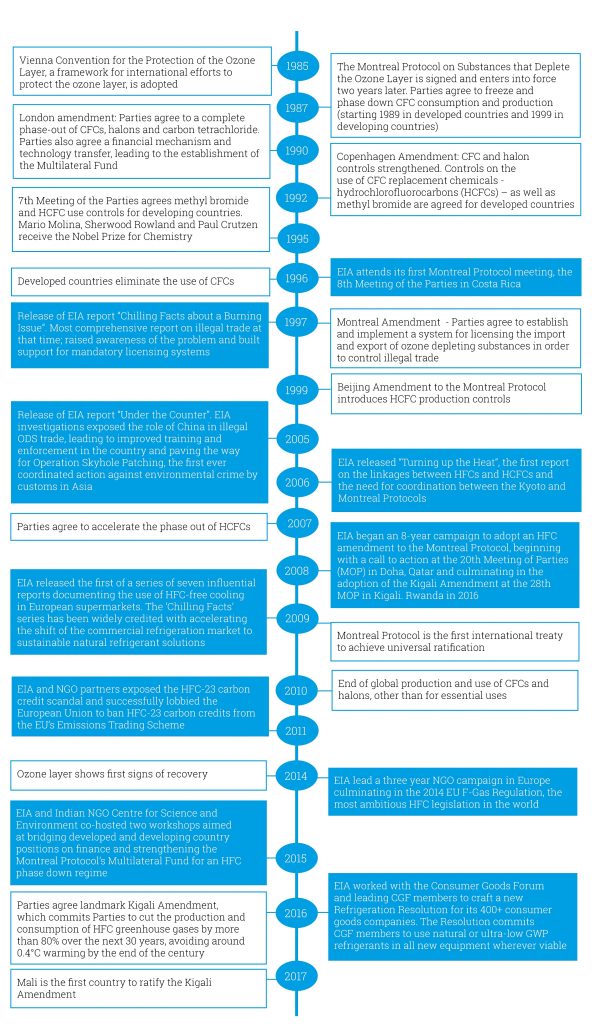