Today (November 1) is the official opening of Japan’s annual Dall’s porpoise hunt, the largest direct hunt of any whale, dolphin and porpoise in the world. 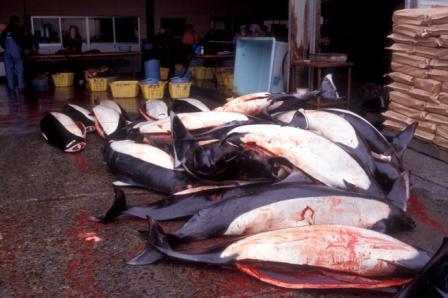 The port of Otsuchi, in northern Japan, is the focal point of the hand harpoon hunt which has claimed up to 15,000 Dall’s porpoises in previous years.

It is still unclear whether the hunt – described by International Whaling Commission (IWC) scientists as “clearly unsustainable” – will go ahead this year due to the aftermath of the devastation wreaked in the region by March’s tsunami.

Once landed, Japan’s catch of porpoises and dolphins is processed and sold in supermarkets and fish markets throughout the country, sometimes illegally mislabelled as ‘whale meat’ to increase its value.

The Environmental Investigation Agency has travelled to Otsuchi, in the prefecture of Iwate, many times in recent years to monitor and raise awareness of the hunt in a bid to ensure its grossly detrimental impact on marine conservation and consumer health does not continue to be overlooked.

“In the past 20 years, more than 300,000 Dall’s porpoises have been hunted just to produce toxic meat for human consumption,” said EIA Senior Campaigner Clare Perry.

“Most Japanese people know nothing of the Dall’s hunt and yet they continue to be misled about it, both in regard to the true nature of the resulting products and to the very serious health risks of eating such contaminated meat.

“The only impediment to this year’s hunt taking place appears to be the physical damage to the industry caused by the tsunami; there’s certainly nothing to indicate any significant change in official Japanese attitudes – and nothing at all to stop them embarking on this dreadful hunt once conditions again make it possible.”

• The Dall’s porpoise is named after William Healey Dall, who collected the first specimen off Alaska in the late 19th century. Dall’s and all other porpoises belong to a family called Phocoenidae. Like dolphins, they belong to the sub-order Odontocete (toothed whales), which in turn belongs to the order Cetacea, including all whales, dolphins and porpoises.

• Since catch records began in the early 1960s, more than half a million Dall’s porpoises have been deliberately killed in Japan’s coastal waters. It is the largest direct hunt of any whale, dolphin or porpoise species in the world.

• Large scale hunting of Dall’s porpoises has taken place in Japanese waters for about 50 years. The average annual kill was between 5,000-10,000 animals during the 1960s and ’70s, but this rose to more than 40,000 after the IWC ban on commercial whaling in 1986. The ban saved many whale species from certain extinction, but unwittingly resulted in a new threat to Dall’s porpoises when Japan’s whaling companies turned to it to replace the minke whales they were no longer allowed to hunt. Dall’s porpoises were also traded to the south of Japan, where over-hunting of striped dolphins had left a market demand for dolphin-type meat.

• Based on 1972 World Health Organisation (WHO) recommendations, Japan’s Health Ministry (JMHLW) set a consumption limit (PTWI) of 170µg of methylmercury (MeHg) in a 50kg person per week and blanket maximum contamination levels in seafood products of 0.3µg/g (parts per million – ppm) MeHg and 0.4ppm mercury (Hg). However, whales and dolphins are excluded from these safety limits.

• Eight Dall’s porpoise blubber products analysed by Japanese scientists, commissioned by EIA, revealed high PCB levels, with one product purchased in Shizuoka , near Tokyo, having a concentration of 4ppm, a startling eight times higher than the regulatory level of 0.5ppm.

• Scientists have established a strong link between mercury in cetacean products and a variety of human diseases and medical conditions, including Parkinson’s disease, arteriosclerosis, immune subsystem suppression and hypertension. Threats to children include autism, Asperger’s Syndrome and Attention Deficit Hyperactivity Disorder (ADHD).