In November 2012, EIA released Appetite for Destruction, a report detailing how China is now the world’s biggest importer and consumer of illegal timber, and exposing Chinese companies involved in securing illegal timber from supplier countries such as Mozambique, Myanmar and many others. 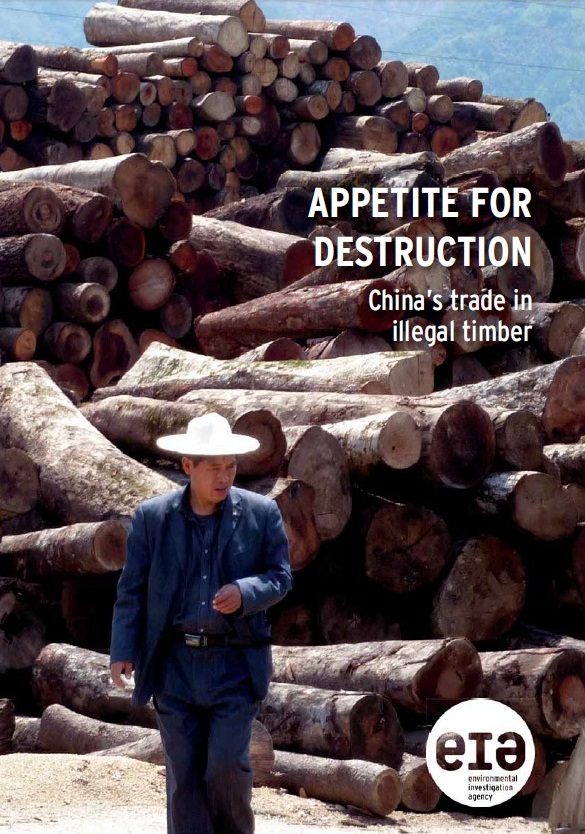 The report can be downloaded in English here and in Chinese here.

EIA called on the Chinese Government to prohibit illegal timber in the Chinese market, and to stamp out crime and corruption in timber procurement.

In January 2013, the China Timber & Wood Products Distribution Association (CTWPDA), the largest timber trade federation in China, posted a statement regarding EIA’s Appetite for Destruction report on its website in both Chinese and English.

The CTWPDA’s statement was critical of EIA’s report, questioning the data and approaches used by EIA in reaching our findings. It further expressed its opposition to the adoption of any of EIA’s recommendations by the Chinese Government.

EIA has in turn responded to the allegations of the CTWPDA statement; you can read our response in full below or download it here in English and here in Chinese.

The CTWPDA claims EIA’s report was biased and overstated, and that it does not adequately recognize efforts in China to reduce illegal logging and the associated illegal timber trade. EIA stands by its findings, based on detailed research and investigations.

However, EIA is encouraged that the CTWPDA statement does acknowledge the issues outlined in Appetite for Destruction are of concern, and notes the references made to various initiatives launched in China to resolve the issue.

Further, EIA agrees with the CTWPDA’s position that “China’s combat against illegal logging and associated trade should focus on … avoiding illegal timber import[s]” into China. Working to eliminate illegal timber imports is the core goal of EIA’s forest campaign in consuming nations, including China, which would appear to support a stated goal of the CTWPDA.

However, there do seem to be differences of opinion on how to eliminate the illegal timber trade in China. While CTWPDA believes that industry initiatives alone can solve the problem of China’s illicit trade in timber, EIA contends that government intervention is needed.

EIA’s report made one core recommendation: calling on the Chinese government for legislation prohibiting illegal timber in the Chinese market.

EIA is concerned that the CTWPDA’s Statement appears to oppose these basic and principled recommendations. Indeed CTWPDA’s statement on our report says that the CTWPDA “would not like to see NGOs like EIA influence … the Chinese government into introducing policies or regulations that would hinder the healthy development of Chinese timber and wood product industry”.

EIA believes that the CTWPDA’s position here implies that ongoing illegal timber imports are essential for the “healthy development” of the Chinese timber sector.

It equally implies that wilfully ignoring the laws of trade partners, allowing continued bribery in producer countries, and allowing continued illegal timber imports by state owned companies are all in the best interests of China’s timber industry, and that they be maintained as policies of the Chinese government in order to sustain China’s manufacturing base at any cost.

EIA fundamentally disagrees with such a negative portrayal of China’s timber sector.

Indeed, it is our belief that continued crime and corruption is inherently unhealthy in any sector, and that the recommendations in Appetite for Destruction will help make China’s timber trade healthy, while facilitating continued access to regulated timber markets such as the EU, the U.S., and Australia – all of which have legislated against illegal wood sales in their markets in recent years.

Overall the CTWPDA statement makes general points, and avoids making any comment whatsoever on the damning substance of EIA’s undercover investigations into law breaking by Chinese timber companies in numerous countries. Rather than attacking the bearer of bad news, EIA would encourage the CTWPDA to ensure its members are not involved in the illegal timber trade.

EIA’s experience from over a decade of encouraging European, North American, and other governments to combat the illegal timber trade has provided some key lessons.

The first lesson is the vital importance of real leadership from industry and trade associations in reforming timber markets. The types of initiatives to reduce illegal timber trade that were outlined in CTWPDA’s Statement, including voluntary trade association purchasing policies and codes of conduct, are important starting points in displaying such leadership. They demonstrate that responsible traders can operate legally, and that they want to do so in markets that offer no advantage for traders of illicit goods.  However, this alone is not enough. Voluntary actions do not stop criminal activities and corruption, nor address them when they occur.

The second lesson EIA has learned is that until markets structurally provide a level playing field in which responsible traders of legal product can flourish, voluntary industry initiatives to exclude illegal timber alone have no real chance of sustainable success. In the EU, for example, responsible timber trade associations realized this (albeit after denying the problem for years), and in partnership with NGOs published clear statements calling for government legislation to prohibit illegal timber, so as to level the playing field. Sending a clear message to governments that they supported legislation, and that they needed it to compete, was ultimately central to the success of industry initiatives.

EIA hopes the CTWPDA can play a similarly progressive leadership role in reforming China’s timber import sector, and encourages the organization to take strong principled positions in both its policy development and public communications

The third key lesson is that clear principled legislation by governments is ultimately the core driver of improved business practices in the private sector. In both the EU and the US, it was undoubtedly the threat of and eventual implementation of legal prohibitions on illegal timber trade that both consolidated and incentivized credible implementation of the various voluntary initiatives developed by industry and trade associations in the preceding years.

Responsible wood trade associations can show governments the way, but ultimately their efforts will be undermined if governments do not legislate to prohibit illegal trade. Legality must not be a voluntary consumer choice in the world’s biggest timber market, and nor should the world’s biggest timber trade associations be advocating for the preservation of illegal timber as a consumer choice.

Regardless of the commendable trade reform initiatives briefly outlined in the CTWPDA Statement, none of them seem to have prevented the types of timber sector crimes that EIA have exposed in Appetite for Destruction.

None of these initiatives have ever resulted in any seizure of demonstrably illegal timber imported into China in contravention of the laws of China’s trade partners. Indeed, China still has no legal mechanism to seize timber illegally harvested in or exported from trade partner’s jurisdictions – clearly highlighting the limits of voluntary industry measures operating in a wider unregulated and often crime-riddled market.

Assuming the CTWPDA seeks to exclude illegal timber from the Chinese market, EIA takes this opportunity to recommend steps the CTWPDA could and should take to help protect its more responsible members from the unfair advantage enjoyed by traders in criminal wood.

The Timber Importers & Exporters Sub-committee of the CTWPDA should:

EIA looks forward to further dialogue with the CTWPDA over measures needed to exclude illicit timber from the Chinese market and the leadership role industry associations can play in this vital endeavour.