On 1 July 2019, Eleven Media Group published an article entitled “EIA Exposed – the campaign against Myanmar’s teak trade accused of making false allegations against innocent timber trader”. Although the article is labelled as an interview, it reads more like a biased opinion piece and is riddled with inaccuracies and falsehoods. In this letter, the London-based Environmental Investigation Agency (EIA) highlights and corrects some of the egregious claims made in your article. This letter is placed on our website to set the record straight.

EIA has never called for the Myanmar Timber Enterprise to be replaced by a new multi-stakeholder system. EIA has supported a full multi-stakeholder approach in reforming the current systems in place that would strengthen transparency of the supply chain in order to meet market demands and regulations in place to prevent illegally sourced timber entering into the international market.

EIA has stated that Myanmar cannot provide all the solutions and respond to illegal logging and the associated illicit trade by itself. No one country would ever be able to do so when the main actors and traders are not even in Myanmar but based in China, and other countries. The illicit trade that takes places across the Myanmar-China border, for example, can only be addressed by both countries and not just Myanmar alone. As EIA has repeatedly stated, Myanmar has made some good efforts in combatting this illicit trade, such as a reduction in the Annual Allowable Cut (AAC) and enacting the log export ban. Neighbouring countries should support Myanmar’s efforts with reciprocal policies such as log import bans and regulations that allow for enforcement to take place when laws are broken. 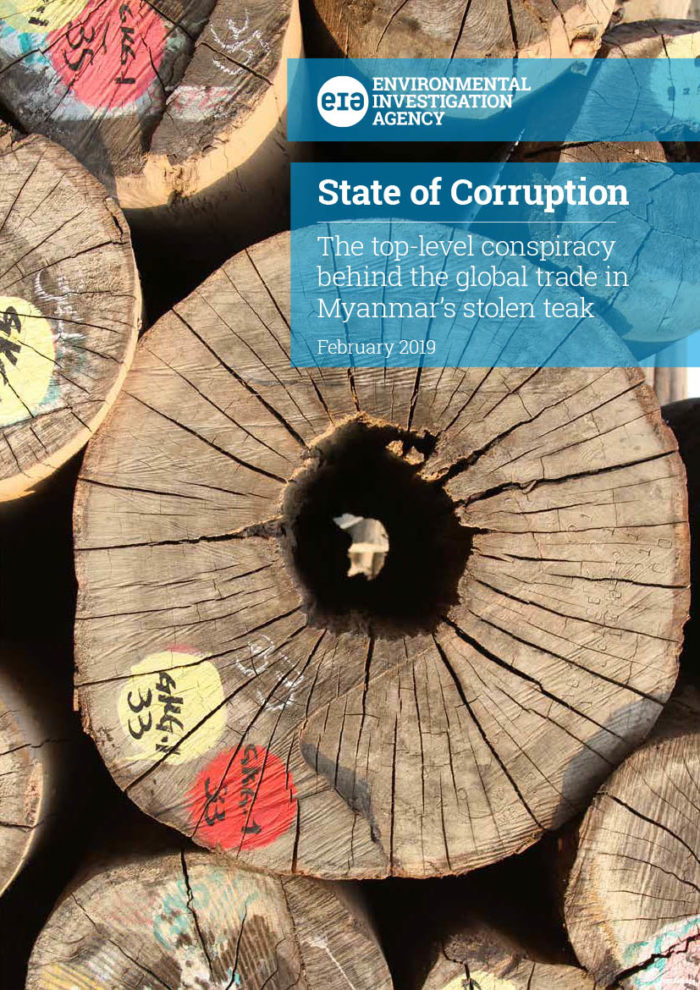 State of Corruption is the result of two years of undercover work, revealing that the multi-million dollar international trade in Burmese teak is riddled with crime and high-level corruption in Myanmar

EIA stands by the findings of its report entitled State of Corruption, which was the result of an exhaustive and comprehensive investigation, using techniques which will be familiar to experienced and competent journalists. Below is a rebuttal of specific errors and falsehoods contained in the article:

• The article states “EIA only cites one source for the picture it paints of [Cheng]”. This is wrong. Two sources quoted in the report directly accused Cheng of corruption – Zheng Kun Fu of Kui Jay and Zheng Tianren of Yuli Wood, who both mentioned payments for the education of children and the quid pro quo of getting cut prices for high quality teak. A third source, Gary Koh, whom EIA confirmed as an associate of Cheng, confessed to corruption himself, saying they paid for entertainment costs for officials and that “a good portion” of payments went into the pockets of officials. He mentioned the purchasing of zoo animals for the regime, something we were able to corroborate with a news article stating that “Mr Cheng” donated penguins for the Naypyidaw zoo, a detail that implicated Cheng in Koh’s corrupt actions. This is all clear to anyone who reads the report.

• The article also states that Zheng Kun Fu denies referring to Mr Cheng and that his words were “bent, manipulated and edited” by EIA. In fact, EIA has a recording of the meeting between its undercover investigators and Zheng which occurred in September 2017. This clearly shows that Zheng mentioned Cheng’s name on three occasions, referring to him as “the president” and also the name of Cheng’s company in Hong Kong, which EIA was able to cross-check.

• In relation to Cheng’s associations with the regime, Han Zaw Lin says “I strongly say that U Tay Zar and U Lu Lu were totally not concerned with our company and were not shareholders”. This is at odds with a leaked US Diplomatic cable from Yangon stating “ Lu Lu is a minority partner with Tay Za in two Chinese companies, Cheung Hing Corporation Ltd. and Cheung Hing Timber Corporation.” These companies were subsequently sanctioned for this association, as recommended in the cable. The report cites both the cable and the sanctions. Furthermore EIA has a second source for this assertion. A separate US Diplomatic cable from Singapore concerns a company owned by Tay Za in the island state used to provide financial support to the Burmese junta. One of the employees stated that company called Cheung Hin (phonetic spelling) was listed on some of the transactions.

• The article refers to “EIA’s claim that in May 2018 sawmills in Yangon illegally exported between 100,000 and 200,000 tons of teak to Europe”. This seems to be a reference to page 24 of EIA’s report, which states “While Cheng’s death could have ended the investigation, EIA heard a huge stockpile of 100,000-200,000 tonnes of his corruptly acquired teak logs were being processed for export in several Yangon sawmills rented from MTE”. As should be clear, the article wildly misquotes EIA’s report. EIA does not use these numbers to make claims about exports, let alone to Europe, and does not claim that amount of teak was exported in one month. The report goes on to clarify that EIA didn’t find the stockpiles, as we refer to Han Zaw Lin talking about a stockpile of 14,000 tonnes of teak, still a large amount.

• The article implicitly claims that the PEFC system works to certify Myanmar timber as sustainable and legal for placement on European markets. In the report, EIA quotes the repeat findings of the FLEGT export group (a group which consists of all of the European competent authorities responsible for administering the European Union Timber Regulation), which say “None of the assurances that the Member State Authorities have received can be relied upon as sufficient for demonstration of compliance with the EUTR obligations”. Competent Authorities in a number of European member states have brought enforcement actions against operators placing Myanmar teak on the market, including in the Netherlands, Belgium, the United Kingdom, Denmark and Sweden. National Courts in Sweden and the Netherlands have confirmed the non-negligible risk assessment in appeal procedures.

More recently, the FLEGT group’s minutes state the following: In view of the combination of a high level of corruption in MM, in particular in the context of forestry, the exclusive forest ownership by the State and management by the State-owned enterprise MTE of natural forests, and the high value of teak grown in the wild, MM remains a high risk country of harvest, Already the Annual Allowable Cut levels, set by the Forest department, risk not to be in line with the MM legislation. Thus, the State itself is at risk of being in contravention of the law. … As a consequence, already the collection of information regarding the formal compliance is not possible. Moreover, the chain of custody back to the stump cannot be assured.

The minutes then contain the following conclusion: The EG upholds its opinion that for teak from MM the risk of illegal harvest is non-negligible and as long as no negligible risk assessment can be confirmed, operators should refrain from putting teak from MM on the EU market.

As the EUTR requires due diligence systems to reduce the risk of illegal timber to non-negligible, this statement makes clear that it is not currently possible to place Myanmar teak on the market in a way consistent with the law.

Furthermore, a recent report by the Myanmar Extractive Industries Transparency Initiative has illustrated serious discrepancies between the figures of the Forestry Department (FD) and the MTE, including the FD reporting three times as much timber cut as MTE in 2014-15 and large inconsistencies between reported sales and reported profits of the MTE. These discrepancies indicate serious problems in MTE’s ability to guarantee timber purchased through its system was legally harvested and free from corruption.

• Han Zaw Lin states that it would be “impossible” to achieve the grading fraud described. His reasoning for this is that MTE wouldn’t let them do it and that MTE conducts multiple checks to ensure grading is correct. That this checking process is reliable is what our report contests and our interviews with Zheng Kun Fu and Zheng Tianren suggested what Han Zaw Lin is saying is wrong. The grading fraud would have been perfectly possible if MTE allowed them to do it – and that is what Zheng Kun Fu and Zheng Tianren said happened.

• The article states “EIA claimed that [Alfred Neumann] imported ‘a few thousand tonnes of teak logs in 2013’” when “Alfred Neumann issued a statement that they actually imported ‘a total of 220 tons of teak round logs in 2013’”. EIA’s report quotes Zheng Kun Fu saying Alfred Neumann’s CEO “purchased ‘a few thousand tonnes” of teak logs directly from Cheng Pui Chee in 2013”. This is a different claim: it does not relate to imports and leaves open what might have happened to the logs purchased once bought. The article also conflates EIA’s findings about Alfred Neumann sourcing timber from China in 2018 with the sourcing of timber from Cheng Pui Chee. The report indicates these were separate procurements of timber.