This summer I’ve had the opportunity to visit some of Thailand’s most spectacular protected areas with forest rangers from Thailand’s Department of National Parks (DNP).

The rangers were eager to highlight the Government’s increased funding for enforcement, bolstering their mission. However, it quickly became clear rosewood crime is a huge problem threatening their lives and the future of Thailand’s national parks.

Thailand’s protected areas contain the largest remaining stocks of Siam rosewood, coveted in China as a sign of wealth and prosperity. Exporting Thai rosewood is illegal, but smugglers are stealing billions of dollars worth each year.

Rosewood prices started to spike with the increase in Chinese millionaires and the lead-up to the 2008 Beijing Olympics. In 2011, EIA investigators witnessed a rosewood bed for sale in China for one million dollars. Since then black market prices have rocketed, making Siam rosewood more valuable than gold.

The astronomical prices and minor penalties for lawbreakers have attracted mafia syndicates, controlling many villages with corruption, drugs and sometimes violence.  Rangers in some cases now face entire communities that are hostile to their conservation efforts. And some villagers now complain the rosewood syndicates want to pay them with dangerous drugs such as methamphetamines instead of cash, which keeps the addicted villagers busy cutting more rosewood.

To deal with the issue, the Thai Government has formed a special task force of at least 15 different agencies, including the police, army and navy. Increased enforcement has helped, but has led to militarisation of the forests and ongoing violence. Thailand’s largest remaining rosewood tree, near the Cambodian border, is now guarded 24 hours a day by a platoon from the Thai Army.  Forest rangers describe a situation where “human caravans” of poor Cambodians – some of them armed with assault rifles and grenades – are crossing the border to steal rosewood. The problem has led to dozens of deaths and shoot-outs along the border, where at least 45 Cambodians were killed in 2012.

With Cambodian rosewood stocks almost exhausted, there is plenty of evidence that Cambodian soldiers and Government officials are involved, examples of which you can view here and here.  In June, a Phnom Penh Post story revealed: “The number of Cambodians crossing the border to illegally log in Thailand can be blamed, at least to some extent, on border officials’ complicity with the illegal timber trade, a Ministry of Interior report on rosewood smuggling says.” 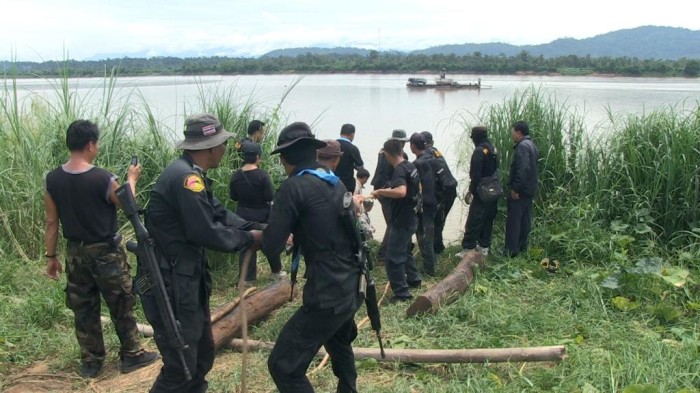 On the Thai side of the border, rangers report that Thais, including those within their own ranks, are equally helping Cambodian and Laotian smugglers. In January 2012, The Bangkok Post reported: “Wildlife officials, including a national park chief, have been accused of helping Cambodian gangs to fell phayung trees in protected forests for export to China.”

And in July 2013, the National News Bureau of Thailand (NTT), Government Public Relations Department, ran a story in which a Thai rosewood smuggler claimed he was making a delivery for a military chief of staff. The article reported: “Mr Noppadon initially claimed that he did not know what the truck was carrying, saying that he was paid 5,000 baht to deliver the ‘goods’ to an unnamed military chief of staff in Bangkok.”

The violence and corruption has led to further tensions between Cambodia and Thailand, with Prime Ministers Hun Sen and Yingluck Shinawatra agreeing to form joint border patrols. But credit to the Thai and Cambodian governments and their vibrant media for at least addressing the issue and taking some steps to correct it. And there are plenty of examples of Thai officials refusing bribes from rosewood traders, as reported here. 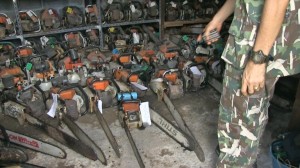 Along Thailand’s Mekong River border with Laos, huge volumes of Thai rosewood are disappearing across the border. I’ve witnessed this several times at firsthand, with rangers explaining to me that they can’t do anything once the wood crosses the river from Thailand to Laos. I don’t know of a single enforcement effort by Laotian authorities and there is little consumer demand for rosewood in Laos.

It is an open secret that most of this timber stolen from Thailand and crossing into Laos is being smuggled on to timber traders in Vietnam. EIA documented this in the 2012 report Checkpoints in which researchers concluded: “That Thailand and Laos have also banned both rosewood harvesting and log exports has resulted in Vietnam effectively becoming a laundering hub for rosewood logs stolen and smuggled from the forests of these countries.”

The other open secret is that China is by far and away the biggest end user of Siam rosewood.  In March 2013 – in a rare move by a Thai citizen – Damrong Pidech, former Director of National Parks, protested publicly outside the Chinese Embassy in Bangkok.  He petitioned China to stop participating in illegally logged Siamese rosewood from Thailand; you can view him here, submitting a petition.

This leads to a big thorny problem for the governments mentioned above: they agreed unanimously to list Siam rosewood on Appendix II of the Convention on International Trade in Endangered Species (CITES) at the 16th meeting of the Conference of Parties (CoP16) in Bangkok this March. However, the smuggling and violence continue.

Thailand’s most famous national park, the Khao Yai-Dong Phayayen Forest Complex, a UNESCO World Heritage site, is under threat. Using camera traps, the environmental NGO Freeland has documented armed rosewood smugglers, one of whom shot a park ranger on July 11, 2013. Then on July 23, 2013 park rangers and smugglers exchanged gunfire, leaving two Thai villagers dead and several injured. There is an ongoing investigation, with both sides blaming each other. 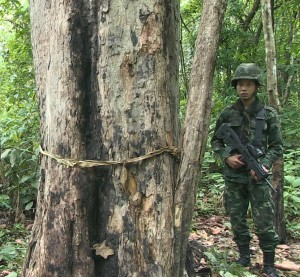 Thai media reports continue to show rosewood arrests daily. However, the arrests always feature poor Thai or Cambodian farmers. No-one important is ever arrested. Depending on who you talk to, there are between 600 to 1,200 seized shipping containers full of rosewood stored at Thai ports. With rosewood reaching prices of US$50,000 per cubic metre and higher, there could be more than US$1 billion in seizures over the past six years. It is unlikely the documents for these shipping containers lead back to a poor rice farmer.

Thai forest rangers earn just 7,500 Thai baht per month (US$240). They are charged with protecting Thailand’s heritage, including trees worth billions of dollars. On July 30, 2013, observed as World Ranger Day, Thailand’s Department of National Parks stated in a press release that from 2009 to July 2013 “over 40 officers were killed, 23 officers were severely injured and 26 officers were injured. And recently, three rangers were killed and four rangers were injured from the operation for protection of the Dong Phayayen-Khao Yai Forest Complex World Heritage site.”

We live in an age of tremendous excess of the elites, where timber traders in Bangkok drive Mercedes and elites in China sleep on million dollar rosewood beds with impunity.  Some of Thailand’s national parks are no longer safe because of their arrogance and greed.

I recently spoke with a Thai forest ranger who summed up his feelings with this statement: “There are a lot of blood and tears being shed, and lives of people being lost.  So I want everyone to know that rosewood is not the auspicious wood.

“This wood is cursed and it could be bad luck to use, so please stop consuming it.”