Last year we raised the alarm about a new Chinese Government policy which repealed a 25-year ban on use of tiger bone and rhino horn in traditional medicine.

In the face of widespread domestic and international outcry, Government representatives said in November 2018 that implementation of the policy was being delayed and that the ban remained in place.However, a document issued in March 2019 by the Government of Shaanxi Province appears to implement the new policy and makes no reference to the November 2018 claims that a full ban is in effect. Instead, the document states that permits to buy or sell tiger and rhino products can be applied for in “special circumstances”.

We have already seen this loophole being used to permit large-scale commercial trade in leopard bone and this document appears to open the door for trade in tiger and rhino parts for use in traditional medicine.

An article published by State-run press agency Xinhua reports on the Shaanxi document and reproduces the statement that permits can be applied for to trade in tiger and rhino products in “special circumstances”.

Aron White, Wildlife Campaigner, said: “This document is emblematic of the mixed messages we are getting from China with regards to tiger trade. At the same time as announcing a nationwide crackdown on illegal tiger trade, the Government repealed a 25-year ban on use of tiger bone in medicine. Government spokespersons then suggested this policy was being delayed, yet the notification allowing medicinal use of tiger bone is still posted on Government websites as valid policy.

“This is contributing to an ongoing ambiguity around the legality of tiger trade, in which demand for tiger parts and products is continuing to thrive.

“An announcement of a total ban on the trade in any big cat parts and products, from any source – including captive-bred – is urgently needed to properly tackle this demand and the transnational organised crime it funds.”

EIA translation of the document issued by the People’s Government of Shaanxi Province:

Rhinos and tigers are rare and endangered wild animals and strengthening the supervision and management of trade and utilisation of rhinos, tigers and the products thereof has great significance for the protection of biodiversity and the advancement of establishing ecological civilisation. The following notification is issued in order to conscientiously implement the requirements of “State Council Notification relating to strict management and control of trade and utilisation of rhino and tiger and the products thereof” (Notification No. 36, 2018), to earnestly protect rare and endangered wildlife resources such as rhinos and tigers and to integrate practices within the province. 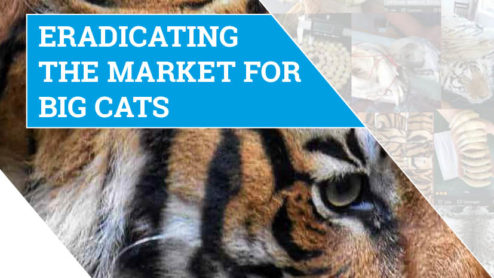