Illegal wildlife traders are seeking to cash in on fears over the novel coronavirus outbreak in China by peddling fake cures containing rhino horn and other endangered species products.

Last week, a Chinese Government agency issued a directive containing recommendations for the diagnosis and treatment of the health crisis currently impacting the country. 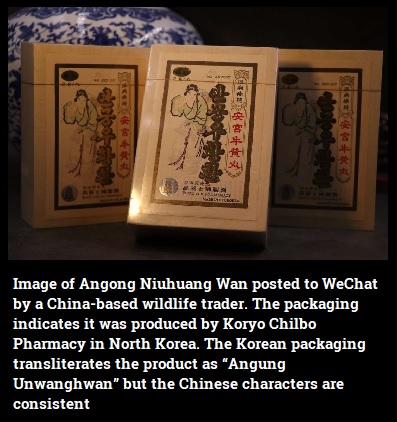 But our investigators have since documented how wildlife traffickers based in China and Laos are exploiting this directive and public fears over the coronavirus outbreak to sell illegal wildlife products as a treatment.

Once again, this highlights the urgent need for effective enforcement against illegal wildlife trade and for the resources to reduce demand for wildlife threatened by trade in traditional medicine, backed up by legal prohibitions.

Sellers based in China and Laos have been posting images of a traditional Chinese medicine (TCM) product called Angong Niuhuang Wan on their WeChat accounts, which they use to advertise to potential buyers.

The version of the product they are offering is apparently produced in North Korea and, unlike the Chinese version, explicitly states that the ingredients include rhino horn and musk.

Angong Niuhuang Wan is sold in the form of medicine ‘balls’ made up of a combination of mineral, herbal and animal ingredients and is used to reduce fever. 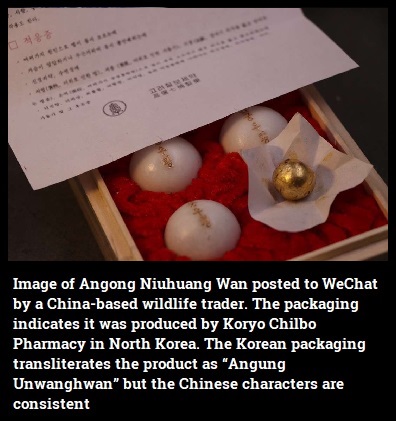 One of the sellers is based in China and has a long history of offering tiger, elephant, helmeted hornbill, rhino and other illegal wildlife for sale via WeChat.

Another is a Chinese-owned company with multiple retail outlets in the Laotian capital Vientiane selling tiger, elephant, bear, rhino and other wildlife parts and derivatives. Some items are sold openly and others under-the-counter, while the company WeChat account is full of illegal wildlife for sale.

EIA has previously reported these sellers to national authorities and intergovernmental bodies, in 2015 and 2018 respectively. That they continue to offer illegal wildlife products with apparent impunity illustrates the need for more committed efforts to tackle illegal wildlife trade and further supports EIA’s call for trade suspensions to be placed on Laos by the CITES Standing Committee.

In China, rhino horn has been replaced by buffalo horn in the formulation for Angong Niuhuang Wan in the official pharmacopoeia since at least 1990. 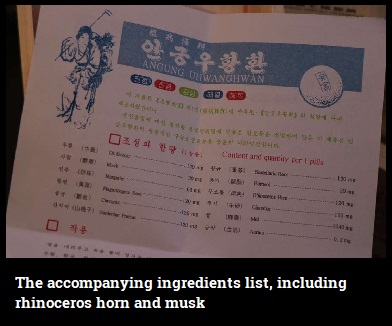 In a document issued by China’s National Health Commission on 22 January 2020, Angong Niuhuang Wan was included in a list of recommended treatments for coronavirus. While there is no indication that the treatment as currently produced in China contains rhino horn, some wildlife traders have linked this Government document to their adverts for the North Korean Angong Niuhuang Wan – the packaging of which explicitly lists rhino horn.

While North Korea is not a signatory to the Convention on International Trade in Endangered Species (CITES) which regulates wildlife trade and under which international commercial trade in rhino products is prohibited, China and Laos are Parties. As such, the import of any rhino horn product into the country is illegal, as would be any re-export to consumers elsewhere.

The irony of traders marketing an illegal wildlife product to treat a virus believed to have originated in the wildlife meat trade again highlights the need for governments, particularly China, to tackle demand for threatened wildlife used in traditional medicine.

China remains a primary consumer of parts and products of rhinos, big cats, pangolins and several other species, including for their use in traditional medicines. To tackle this demand, policy changes needed include a comprehensive, permanent ban on the use of parts and products of wildlife threatened by trade, including those from captive sources.

The majority of TCM treatments do not use any animal products and several opinion leaders within TCM have called for an end to the use of wildlife in the interests of biodiversity and the international image of TCM.

However, authorities in China continue to permit the use of threatened wildlife such as pangolin scales and leopard bone. A 25-year ban on use of farmed tiger bone and rhino horn in traditional medicine was repealed in October 2018 and ambiguity prevails today over the status of this policy.

As we wrote last week, the recent emergence of coronavirus has reignited discussion within China about banning all trade in wildlife, with many academics and even state media calling for a total ban.

EIA supports these calls from within China and elsewhere, while extending our support to those affected by the illness and the efforts of authorities to tackle and contain it. We believe that the current situation represents an key opportunity for the Chinese Government and other countries to implement a permanent ban on trade in threatened wildlife.