A small group of antiques traders have failed in their bid to overturn the UK Ivory Act.

The Act, which has received Royal Assent but has not yet taken effect, will restrict the sale of elephant ivory to, from and within the UK. It was passed with overwhelming popular support and cross-party Parliamentary backing in 2018

A High Court Judge found in favour of the Department for Environment, Food and Rural Affairs (DEFRA) and against a group of antiques traders, called the Friends of Antique Cultural Treasures (FACT) , which had argued that the Ivory Act was contrary to EU law and infringed their human rights.

Mary Rice, our Executive Director, said: ” This is a victory for common sense and one which maintains the UK’s position as a global leader when it comes to fighting the illegal ivory trade.”

The EIA is part of a coalition of 11 conservation organisations which supported the Ivory Act, arguing that any legal trade in ivory provides cover for the illegal trade because it is difficult to distinguish between antique and newly carved ivory.

The UK is one of the world’s leading exporters of antique ivory, particularly to China and Hong Kong, which are two of the largest markets for newly-poached ivory.

The UK’s exports and domestic market fuel a continued demand for ivory by perpetuating its perceived value in the eyes of consumers and making it socially acceptable.

The European Commission is currently considering broad new restrictions on ivory trade across the European Union, based in part on the UK Ivory Act and even using similar language.

Other countries, such as Singapore, Australia and New Zealand have introduced, or are considering, similar legislation also based on the Act, which has been described by the New Zealand Government as ‘emerging international best practice’.

While the antiques trade had claimed the UK Ivory Act will cause “substantial economic damage” to their industry, the impact is likely to be minor as ivory accounts for less than one per cent of annual sales in many UK auction houses.

John Stephenson, CEO of our campaign partner Stop Ivory, said: “Challenges to the new legislation fly in the face of British public opinion, which increasingly puts the conservation of nature before profit. We hope that’s the end of the matter and that the Government can get on with implementing the Act without further distractions.” 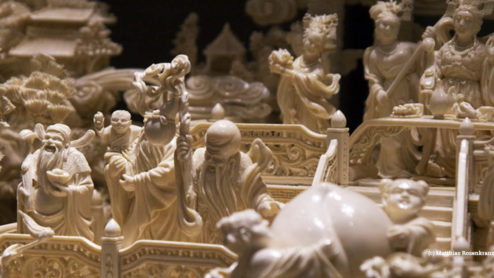