Over a million marine mammals, birds, turtles and fish die every year as a result of entanglement or ingestion of marine debris, choking and entangled in man-made litter. 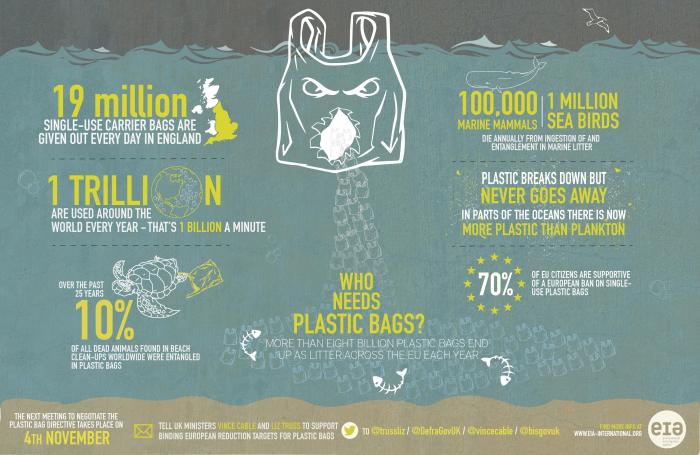 The UK Government is opposing concrete binding European targets to reduce single-use plastic bags, one of the most easily tackled forms of marine debris.

Every year, 85.3 billion single use non-biodegradable bags are used in Europe. Only 6.6 per cent are recycled. On average, a plastic bag is used for just 12 minutes before being discarded. More than eight billion plastic bags end up as litter across the EU each year and they are the third most common type of refuse found on European beaches, lakes and rivers.

Once in the marine environment, each piece of plastic persists for hundreds of years, entangling, injuring and killing marine life. These plastics eventually fragment but do not biodegrade, ultimately breaking down into microplastics. In parts of the ocean there are now more pieces of plastic than plankton. These microplastics and the pollutants they carry may be harmful for animals and humans. They are ingested by fish and other marine wildlife, making their way into the food we eat.

European member states are currently negotiating a proposal for a Directive on plastic bags, with a view to reaching agreement by early December this year.

In April, you helped us persuade the European Parliament to propose mandatory reduction targets to ensure that each European country reduces consumption of plastic bags by 50 per cent within three years and by 80 per cent within five years. Although falling short of the total ban required, the European Parliament’s proposal represents a good first step forwards in tackling plastic waste and would result in huge environmental and economic gains.

Unfortunately, a number of European member states, including the UK, are opposing having mandatory reduction targets, despite the fact that there is overwhelming public support for strong measures to address plastic bag use.

At the same time, the proposed plastic bag charge in England, set for October 2015, is riddled with exemptions that will make it much less effective than charges already in place in the rest of the UK. Plastic bags are just a small part of the plastic problem we are facing but the easiest to deal with. California and France have just announced plans to ban single-use plastic bags altogether in the next few years, while many developing countries have already implemented bans – why is the UK opposing any reduction target whatsoever?

The next meeting to negotiate the plastic bag directive takes place on November 4. We need your help to ensure the UK Government changes its position and leads efforts to tackle plastic waste across Europe by supporting mandatory reduction targets for single-use plastic bags.

You can do this in two ways:

If you are a Twitter user, please send a Tweet to the Ministers and their respective departments, calling on them to support binding measures to cut consumption of single-use plastic bags.

To keep the pressure up, join us in sending these Tweets every day until the next trialogue meeting on November 4.

2. Send an email to UK Ministers

Tell Vince Cable, Secretary of State for Business, Innovation and Skills, and Liz Truss, Secretary of State for Environment, Food and Rural Affairs, that it is unacceptable to perpetuate a throwaway society. Ask them to support binding reduction targets to ensure consumption of single-use plastic bags is effectively addressed throughout Europe.

You can compose your own message or use/adapt the sample email we’ve provided here and send them to defra.helpline@defra.gsi.gov.uk and mpst.cable@bis.gsi.gov.uk

Marine debris kills more than a million seabirds, mammals, turtles and other marine animals every year, choking and entangling over 600 species.

Often used just once and discarded, plastic bags are the third most common type of litter found on European beaches, lakes and rivers. They can persist in the marine environment for hundreds of years, eventually breaking down to microplastics – themselves a growing threat to marine life and potentially human health.

As you know, European member states are currently negotiating a proposal for a directive to reduce consumption of lightweight plastic bags in the EU. A ban on all single-use bags is the most effective and achievable first step to addressing the issue of plastic waste, a move supported by more than 70 per cent of European citizens. I am most disappointed to learn that the UK is opposing any reduction targets. I urge you to reconsider this position and to support the binding reduction targets proposed by the European Parliament of 80 per cent within the next five years.

It is not enough to take measures domestically; marine debris is a global threat and requires coordinated regional and global action. Without binding European reduction targets, there is a high risk that any action in progressive member states will be offset by a lack of action from others.

Please demonstrate that you care by helping to end this unnecessary, throwaway blight on our environment. Support binding European reduction targets for single use plastic bags.