Internet retailing giant Rakuten is selling elephant and whale products and we need your help to urge it to stop.

Here are five easy but important ways in which you can play a vital role in telling Rakuten and its co-founder/CEO Hiroshi Mikitani that profiting from the slaughter of elephants and whales is unacceptable:

EIA has produced this short campaign film in the style of Rakuten’s own ‘We R …’ commercial to raise awareness of its sales of elephant and whale products.

Please share it among your family, friends and contacts, and embed or link to it in any of the online forums and communities you frequent, such as Facebook and Google+.

As well as the campaign film, EIA has produced these posters, again in the style of Rakuten’s own advertising, to spread awareness of the company’s sales of the products of endangered and protected wildlife. 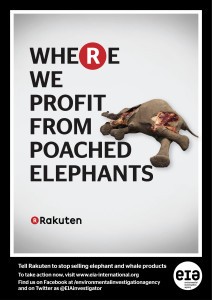 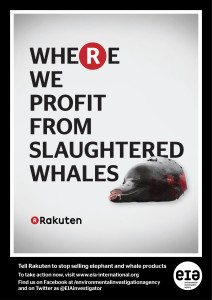 Click on each to be taken to a downloadable, hi-res version. Please share them widely and embed them in online platforms such as Facebook and Google+.

Rakuten recently became a major investor in the successful photo-sharing site Pinterest, so it would be especially effective to share these images there.

If you are a Twitter user, send a Tweet to Rakuten calling on it to ban all sales of elephant and whale products. You can compose your own, or use the sample Tweets below.

Let Rakuten know how unacceptable it is to be making money from the slaughter of elephants and whales by sending an email to CEO Hiroshi Mikitani.

You can compose your own message, or use/adapt the sample email below, sent for the attention of Rakuten CEO Hiroshi Mikitani.

As with many major online entities, Rakuten appears very reluctant to share direct email addresses; you can send your email via an on-screen form at https://secure.rakuten.com/AC/contact/ContactEmail.aspx

Following the revelation in the Environmental Investigation Agency report Blood e-Commerce (http://ow.ly/uEOpu) that Rakuten is selling elephant and whale products, I am deeply concerned to learn that your company is profiting from these cruel trades and respectfully request that the entire Rakuten family of companies immediately and permanently bans all such products.

Rakuten is a fast-growing, influential and apparently progressive international brand name and as such I would hope to find it shares my view that it is wholly improper for it to continue to sell products which are driving protected and iconic species closer to extinction and, in the case of ivory, which fuel corruption and criminality.

You may be aware that some of the whale products sold through Rakuten originate from endangered species which have been granted international protection, while others have been shown to contain dangerously high levels of mercury and other toxins seriously harmful to human health.

Further, the failure of Japan to properly manage its domestic ivory trade means a substantial proportion of all ivory in circulation derives from elephants which have been poached and whose ivory has been trafficked by international criminals.

Please demonstrate that you and Rakuten genuinely care by banning the sale of all elephant and whale products, now and forever.

On Google+, it’s at https://plus.google.com/+RakutenIchiba/posts?partnerid=ogpy0

Visit the pages and post a message to register your protest – you could adapt the above messages, or compose one of your own.

Please circulate this protest to everybody you know and encourage them to help – the more people who protest to Rakuten, the more the company is likely to respond in a positive and responsible way.

Thank-you for your help and action!