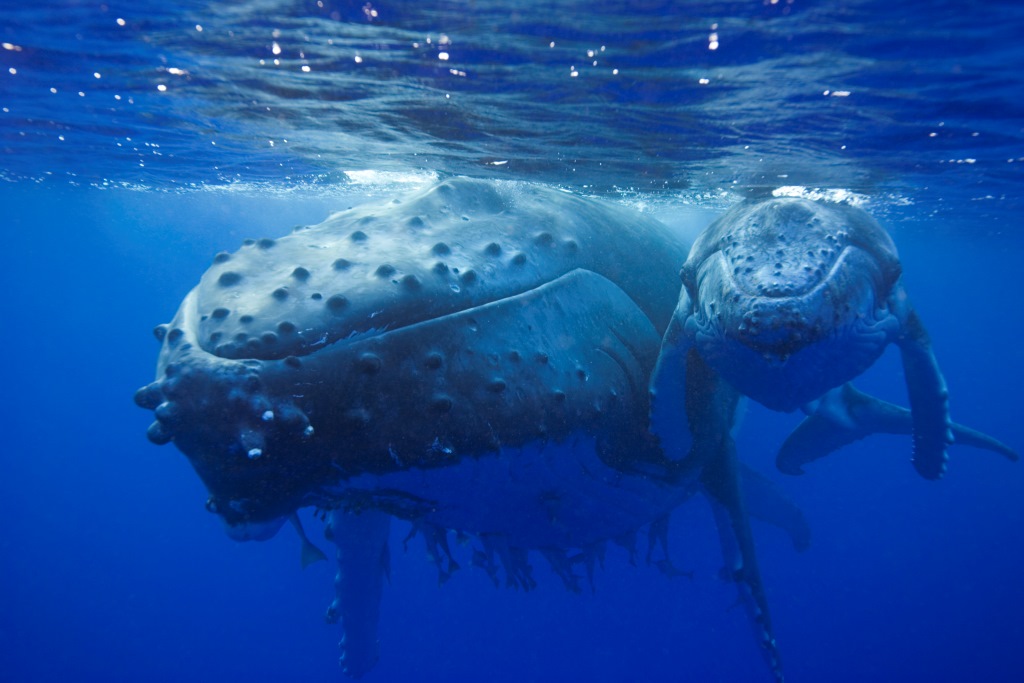 TODAY (December 2) is the 70th anniversary of the International Convention for the Regulation of Whaling (ICRW), signed in Washington DC in 1946 and entering into force on November 10, 1948.

The International Whaling Commission (IWC) was set up to undertake the business of the Convention, from offices in Cambridge, UK.

The IWC is also celebrating the 30th anniversary of the implementation of its most remarkable decision – the international moratorium on commercial whaling, which has saved hundreds of thousands of whales, provided respite from the devastation of 20th century commercial whaling and enabled whale populations to begin to recover.

The opening of the Convention’s preamble recognises “the interest of the nations of the world in safeguarding for future generations the great natural resources represented by whale stocks”.

Technological advances for catching whales in the late 19th century and the expansion of processing capabilities in the next created an industry that could catch and quickly render virtually any whale in any ocean. The IWC, described in its early days as a ‘whalers club’, utterly failed to safeguard whales in its first three decades, allowing several species to be driven to the brink of extinction, including the magnificent blue and fin whales, the two largest animal species that ever lived.. 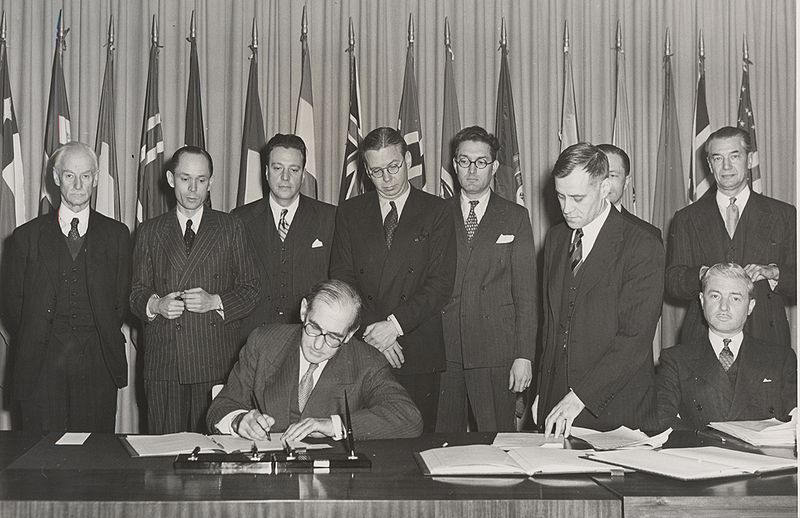 Signing of the International Convention for the Regulation of Whaling in Washington DC, 1946, by US Government

The objective of the industry was to maximise profits from whale oil and to maintain some sustainability of the industry. The IWC adopted the Blue Whale Unit (BWU), a quota system in use since 1931 and based upon the amount of oil obtained from one blue whale compared to other species. The IWC’s first meeting in 1949 agreed a quota of 16,000 BWU in the Antarctic whaling season, including a limit of 1,250 humpbacks. The catches produced over two million barrels of whale oil (3,500 tonnes) a year; sperm whales provided over 250,000 barrels. Despite the concerns of scientists, for the next decade the Antarctic quota never fell below 14,500 BWU. The quota for 1959/60 season of 15,000 BWU was exceeded by 300 BWU. During the 1960s, catches of whales in the Antarctic fell and in 1970 the limit was set at 2,700 BWU.

The BWU system was clearly ridiculous as it ignored the impact on individual populations of each species and viewed multiple whale species as a collective commodity. In 1971, the IWC ﬁnally agree to set species and area-specific catch limits. Eminent whale scientist Dr Sidney Holt observed: “The BWU argument had at last been won – when there were hardly any BWUs left in the ocean.”

Sperm whale oil was highly prized for its quality, even used as a lubricant for intercontinental ballistic missiles and automatic car transmissions due to its lubricity and heat stability. Decades later, oil from the lowly jojoba plant was found to be a better substitute for high-friction applications, causing the sperm oil price to collapse by 90 per cent.

The IWC had little in its rules to prevent illegal whaling. In 1994, the extent of the illegal whaling by the USSR came to light; it is estimated that 178,726 whales were killed in addition to those it reported to the IWC, particularly humpbacks whose Antarctic populations crashed.

At its first meeting on May 30, 1949, the IWC did one very good thing by setting up a Scientific Committee. While its scientific concerns were ignored in favour of whaling profits in the first decades, 70 years later it is the world’s greatest repository of cetacean (whale, dolphin and porpoise) scientific knowledge and expertise. EIA is privileged to have its scientists actively participating in Scientific Committee meetings for the past 22 years.

The 1960s was a new era. As awareness of the plight of the whales increased, calls grew for an end to this reckless, cruel industry. In 1972, the UN Conference on the Human Environment passed a resolution by 52 votes to zero calling for a 10-year moratorium on commercial whaling. Similar proposals were submitted to the IWC meetings in 1972, 1973 and 1974 but failed to achieve the required 75 per cent majority support. 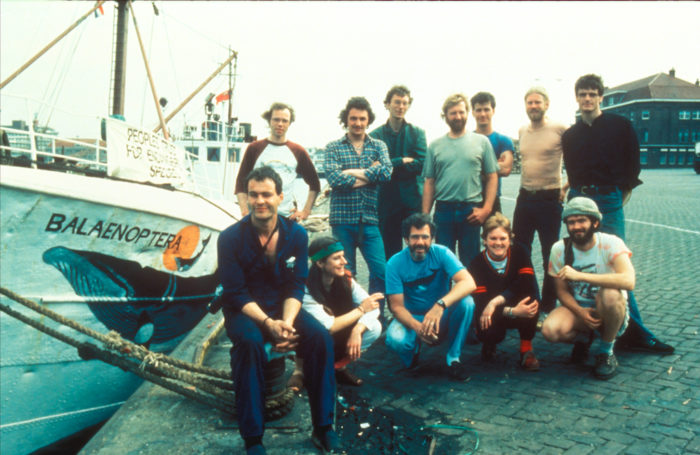 In the mid-1970s, Greenpeace was created and began confronting Russian whalers in the north Pacific. EIA co-founder Allan Thornton set up Greenpeace UK, bought the Rainbow Warrior and masterminded the campaign against Icelandic whaling. Also aboard was EIA co-founder Dave Currey, responsible for photographing the whaling. The dramatic documentation shocked the world and pressure to ban whaling grew.

Allan began attending IWC annual meetings, working with other NGOs and governments to persuade the IWC to agree an international commercial whaling ban. In 1982, despite 10 IWC member states still commercially whaling, the moratorium was agreed for implementation by 1986.

Norway and the USSR lodged objections to the decision and Norway used this objection starting in 1993 to continue commercial whaling. Japan exploited a different loophole in the Convention to carry out so-called ‘scientific’ whaling in the North Pacific and Southern Ocean Sanctuary. Iceland did the same for a few years and in 1992 left the IWC – only to rejoin in 2002 with a controversial reservation to the moratorium, which it used to resume the hunting of minke and endangered fin whales. 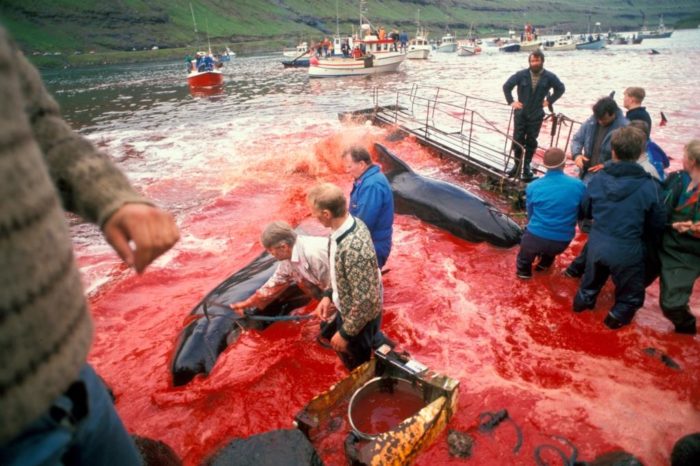 Once the moratorium was adopted, EIA began to draw the IWC’s attention to the plight of the ‘forgotten’ smaller whales, dolphins and porpoises often referred to as small cetaceans. In 1986, EIA began submitting papers on the Faroe Islands’ pilot whale hunt, resulting in three IWC resolutions pressuring the Faroese Government to address the inherent cruelty and dramatic increase in the number of whales killed. This resulted in improvements to killing methods and reductions in numbers killed.

In 1990, EIA published the Global War Against Small Cetaceans, the first of three reports exposing the annual slaughter of hundreds of thousands of small cetaceans, calling on the IWC to act. We worked with the UK Government to propose a resolution on the Dall’s porpoise hunt, which had increased from about 10,000 a year to almost 40,000 after the Moratorium. The resolution, calling on Japan to reduce the hunt to below the previous average and undertake population assessments, passed with only one vote against – that of Denmark, which represents the Faroe Islands. Japan abstained but nevertheless took action to reduce the hunt. This was the first small cetacean resolution ever passed by the IWC and the start of a new era..

In the early 1990s, only five years after the Moratorium, some scientists claimed slow-breeding whales were beginning to recover and the ban may not be justified. At the same time, the ozone hole and climate change were becoming widely recognised as serious global threats, the impacts of ocean pollution were being noted and untold numbers of cetaceans were dying in fishing nets.

EIA argued long and hard that a sustainable catch limit could not be calculated unless the impact of environmental threats on whale populations was clearly understood, resulting in environmental concerns becoming a standing item on the IWC’s Scientific Committee agenda and, subsequently, at annual meetings. That work, initially dismissed by some as an insignificant ‘side line’, is now the primary focus of much of the IWC’s work..

While Iceland, Japan and Norway maintain their relentless efforts to overturn the global ban on commercial whaling, every IWC member recognises that all cetaceans face significant threats from overfishing, climate change, pollution and other man-made impacts on the oceans and that the IWC has an important role in mitigating these threats.

On its 70th anniversary, we can say that for half its life the IWC failed to prevent excessively cruel, chaotic destruction to whale populations around the world – but at the age of 35 it made a profound conservation and welfare decision to save them.

With the help of EIA and others, it has matured into one of the world’s most effective international conventions.

So, happy anniversary to the IWC – and, especially, to its Moratorium!