Today (9 July) marks 10 years since EIA took its first tentative steps into the world of blogging.

Since that time we’ve published a total of 392 blogs, ranging in content from behind-the-scenes stories of life undercover from our fearless investigators to commentaries on issues in the news by our expert campaigners and much else inbetween.

By way of a modest celebration of the milestone, we thought we’d reshare with you the blog which in the past decade has consistently attracted the greatest number of readers and remains something of an evergreen success on the website, Sounds green to me – 10 top environmental songs from 18 May 2012.

And to all our regular readers, sincere thanks for your support over the years.

Few things can capture the mood of a moment (or movement) quite as well as a song – think of New Labour’s 1997 victory and it’s all but impossible to divorce it from D:Ream’s now horribly ironic Things Can Only Get Better.

True, most music has other interests in mind than championing causes, but in among the welter of self-obsessive navel-gazing, hedonism and despondent odes to lost love there’s a rich seam of eco-conscious music too.

Between the bombastic and scathing protest songs of Neil Young and the poignant poetics of Laurie Anderson, there’s room on the green songs playlist for comedy, pop, rock, blues, soul and the experimental avant garde.

So here, for your entertainment on an overcast Friday afternoon and in no particular order of merit, are 10 of the best songs concerned with the environment.

Don’t care what the governments say
“they’re all bought and paid for anyway”
Save the planet for another day
“hey big oil, what do you say?”

Don’t it always seem to go
That you don’t know what you’ve got
Till it’s gone?
They paved paradise
And put up a parking lot

• The Pixies – Monkey Gone to Heaven

• Soundgarden – Hands All Over

See the halibuts and the sturgeons
Being wiped out by detergents.
Fish gotta swim and birds gotta fly,
But they don’t last long if they try.

• The Beach Boys – Don’t Go Near the Water

Oceans, rivers, lakes and streams
Have all been touched by man
The poison floating out to sea
Now threatens life on land

Oil wasted on the oceans and upon our seas
Fish full of mercury
Oh, mercy mercy me
Oh, things ain’t what they used to be

I think I’m so educated and I’m so civilised
’cause I’m a strict vegetarian
But with the over-population and inflation and starvation
And the crazy politicians
I don’t feel safe in this world no more,
I don’t want to die in a nuclear war.
I want to sail away to a distant shore and make like an apeman.

And by way of a bonus track …

• Frank Zappa and the Mothers – Billy the Mountain

A special word of thanks goes to my colleague Charlotte, who not only made some great suggestions for the above list but also introduced me to Frank Zappa’s epic Billy the Mountain.

As it’s not possible to improve on Charlotte’s summary of song, it’s best to let her introduce it in her own words:

“This half-hour long rock opera, first performed live in 1971, tells the story of a mountain named Billy who finally receives his royalty cheque, the result of his photos appearing on many scenic postcards. He and his stunning wife Ethel, a tree (growing off of his shoulder), head off on a holiday adventure across America, with Billy inadvertently causing a trail of destruction due to his size and bulk. This upsets several people, including a new breed of superhero named Studebacher Hoch, whose one mission is to thwart and destroy Billy and Ethel once and for all. Many capers en route, but the final message is clear: this is what happens when you mess with a mountain and when you mess with a tree.” 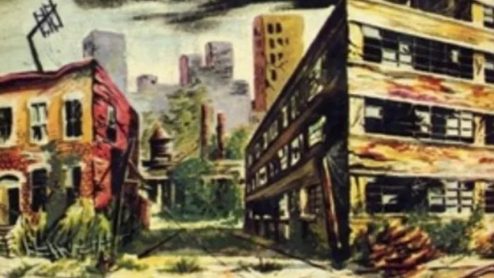