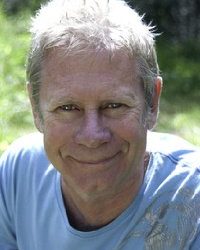 The new documentary Blood Ivory Smugglers, following EIA undercover investigators in Hong Kong, China and Kenya, makes its UK premiere on Nat Geo Wild on Thursday, December 29, at 8pm; EIA co-founder Dave Currey was one of the team being filmed and here reflects on his experiences of campaigning against the ivory trade. 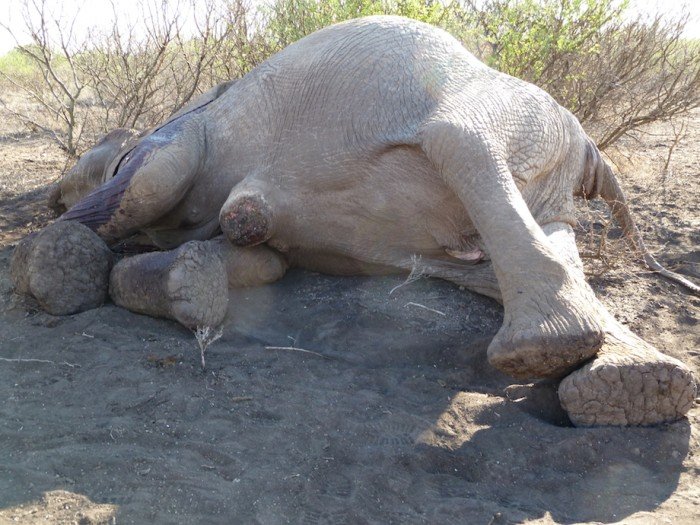 The mutilated corpse of Hope, as investigators found her in Kenya’s Samburu National Reserve (c) EIA

Unfortunately, the sight of an elephant carcass is nothing new to me. Neither is the smell of death. But wandering around the blood-blackened soil surrounding the remains of an elephant matriarch last March renewed a deep sadness and brought back so many memories.

It had also been in Kenya, back in 1988, I had taken the photos of two elephant carcasses that visually spearheaded EIA’s successful campaign to ban the international ivory trade.  Twenty-three years ago I could never have guessed how resoundingly successful that ban would be for those countries which embraced it, including Kenya. But here in front of me, the decomposed body of a well-known and studied elephant named Resilience lay in a setting sun, casting long dark shadows over that success, testament to the serious trouble Africa’s elephants face again. 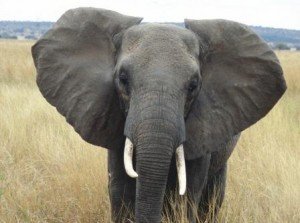 An hour later, word of gunshots reached us – I was with Mary Rice and Paul Redman from EIA and David Daballen from Save the Elephants – and as the sun rose the next morning we stood over the body of another matriarch from the same group, named Hope, her tusks hacked from her face and her blood freshly pooling in the dirt. The look of horror and dismay on those that ‘knew’ her mirrored our own despondency. Local villagers were also very angry at her loss because she and her calves were familiar visitors to this area.

Days later I sat on the banks of a sand river next to another carcass. This time I was with a group of Samburu elders who wanted to tell me how painful the elephant poaching was to their community. They explained how so much of their culture is based around elephants. For instance, when a new bride enters her new home, a fire is lit with the dung from a young elephant. “Without elephants we can’t marry” I was told. When this wounded elephant had wandered onto their land, it collapsed just before reaching water. The villagers claim to have been beaten by the authorities because it died on their land.

A week later, further south in the Chyulu Hills, we heard about the radio-collaring of big old tuskers, a desperate attempt to follow them when the rains came, to protect them from the guns. Later that day, as we and the film crew from Red Earth Studio filmed a community anti-poaching team near the Tanzanian border, another message came through: gunmen had raided villages in the area. The brave Maasai scouts left the gaze of our cameras to protect their people. The scourge of the ivory trade, its corruption, weapons and murder, is back.

It has been some time since I have concentrated heavily on the ivory trade and more than two decades since I had traversed the globe working undercover, providing evidence to support the EIA campaign in 1988/9. But what has struck me so clearly is that the same ingredients for the massacre of hundreds of thousands of elephants in the ’80s are again at the forefront. Perhaps most startling is the fact that so many of the same players are making so many of the same mistakes all over again.

The ivory trade has been exploitative since its inception thousands of years ago. In the 20th century it started to use modern machinery and weaponry, greatly increasing its ability to wipe out a species. Traders, quite naturally, fought their ground when faced with regulation and then prohibition. But out of the ‘conservation’ movement, in brazen defence of a wildlife ‘sustainable’ use policy (use it or lose it), apologists for this crooked trade, posing as ‘experts’ leapt out in support. It is no secret that EIA fought WWF in 1989 until the risk to its membership, among other things, forced it at the eleventh hour to half-heartedly back the ban. 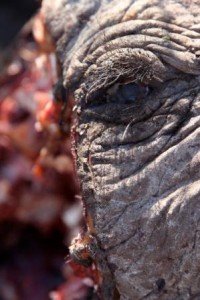 Unbelievably, in 2008 CITES gave China permission to buy huge amounts of ivory to feed into its domestic market. At the time, a press release from TRAFFIC, which vehemently opposed the ivory ban in 1989 and now operates the Elephant Trade Information System for CITES, stated: “China has acted rather successfully against its own illegal domestic ivory market …”

It appears that such misinformation continues to hoodwink decision-makers. I can’t believe the same people are spreading the same nonsense. Investigations carried out in China showed then, and show now, that China has failed utterly to act against its own illegal domestic ivory market. This single act of opening up the Chinese ivory market has already resulted in an appalling loss of human life in Africa as poaching has increased, provided the money for increased corruption and, of course, littered the Continent with elephant carcasses.

Having travelled the world for so many years, I am fortunate to have seen many wild elephants in huge herds, these extraordinary architects of their environment. I have also met some of the most wonderful people risking their lives to keep the poaching at bay. They all recognise the value of live elephants to the ecosystem and, through tourism, to the economy.

One Samburu elder explained to me that in Samburu culture, if a warrior kills an elephant, he and his family are considered cursed. Nobody will marry their children.  Perhaps I’ve smelt death too often and have become jaded, but it seems to me that a good old fashioned curse might be equally applied to those who repeatedly fuel the ivory trade from afar. Although I would draw the line at cursing their children, at the very least their credibility should be thrown into a steaming cauldron, never to pollute our beautiful world again.