In November 2014, the Environmental Investigation Agency released its report Vanishing Point, revealing how a combination of criminality and corruption in Tanzania had caused the country to lose more elephants to poaching than any other African nation.

Figures in the report made for sobering reading. According to the Government’s own figures, the elephant population in the Selous ecosystem had crashed from 38,975 in 2009 to just 13,084 by late 2013. The population in the Ruaha-Rungwa ecosystem declined from 31,625 to 20,090 during the same period, making it home to more elephants than any other region of Tanzania.

It now appears that status was short-lived. Leaked figures reveal that the Ruaha-Rungwa area population had fallen to just 8,200 elephants by late 2014 – a catastrophic decline of 60 per cent in a single year, caused by industrial-scale poaching. 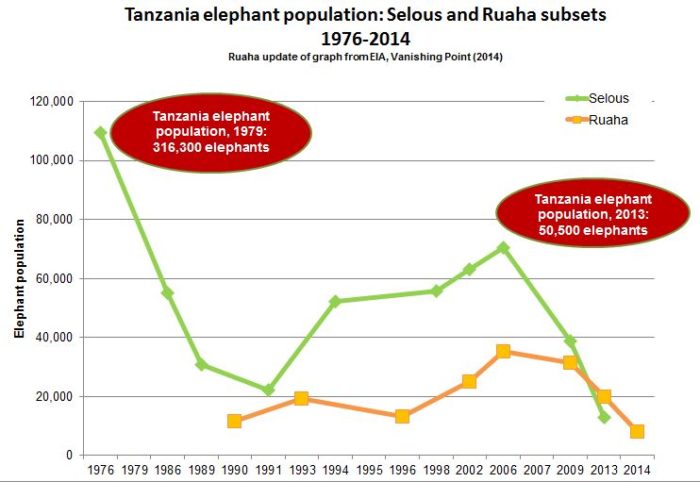 Yet the news that Tanzania’s elephant population has plummeted yet again is sadly predictable, as is the fact that the figures have been available for months but suppressed; despite receiving the data in January, the Government of Tanzania has failed to publish it on the grounds that it needs to validate it or conduct a recount.

It appears the main justification for this is the discrepancy between the actual population figures and the number of carcasses. Burying such bad news has happened before. In 2009, when a similar report highlighted an alarming decline in elephant numbers in the Selous, the response was the same – Tanzania’s Ministry of Natural Resources and Tourism chose to cover-up the figures which, to great embarrassment, were subsequently leaked at a major international meeting.

Five years on and the Government has yet again failed to acknowledge the true scale of the problem in any recent public statements, instead choosing only to highlight cherry-picked positive examples of relative stability, such as the Selous where figures have risen marginally.

Worryingly, such practices could soon become the norm across the country. Last month, Tanzania’s parliament passed an oppressive Statistics Bill, which in effect makes it a criminal offence to publish any data not endorsed by the National Bureau of Statistics. If signed into law by the country’s president, those falling foul of the new bill could by jailed for a minimum of one year.

Whether Tanzania’s judiciary has the capacity to implement such penalties is highly unlikely. EIA’s detailed analysis of court proceedings connected to major ivory seizures linked to Tanzania since 2009 found that out of 13 cases involving 26.5 tonnes of ivory, just one person has been convicted.

The international donor community, rightly concerned by the shocking decline in Tanzania’s elephant population caused by rampant poaching, is lining up to fund a range of anti-poaching and elephant conservation projects in the country. In return, it should demand basic openness and transparency from the Tanzanian Government.

For its part, the Government should be honest about the scale of the poaching problem it faces and step up efforts to prosecute the main culprits.