EIA campaigners have prepared a briefing to the United Nations Framework Convention on Climate Change (UNFCCC) for the 21st Conference of Parties (CoP21) currently taking place in Paris. 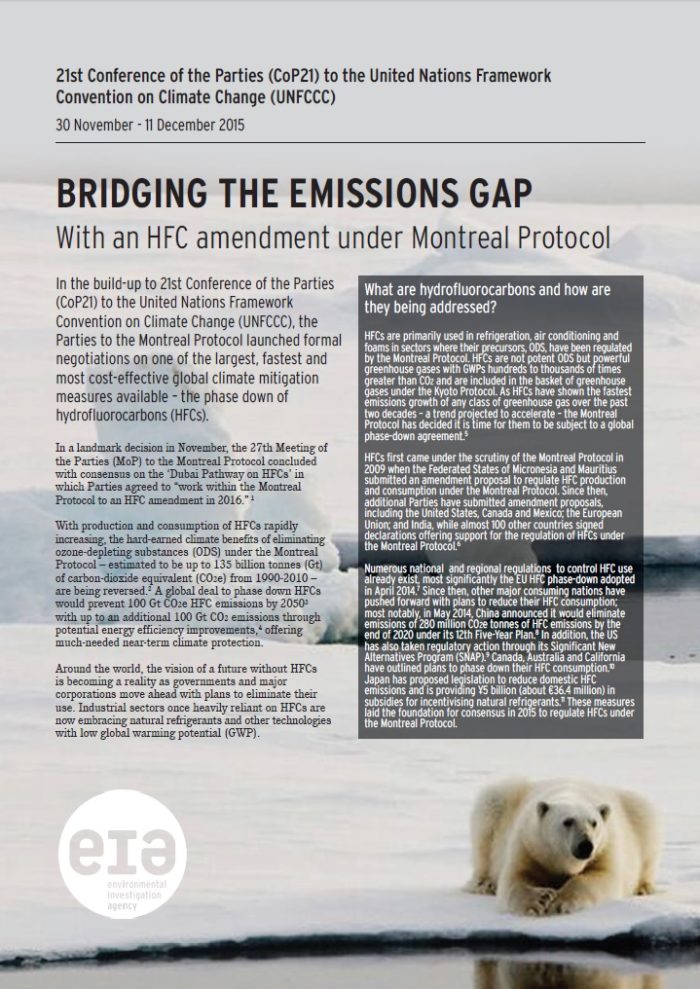 Hydrofluorocarbons (HFCs) are man-made gases used in refrigeration, air-conditioning and foams in sectors where their precursors, ozone-depleting substances (ODS), have been phased out by the Montreal Protocol.

HFCs are powerful greenhouse gases with warming potential hundreds to thousands of times greater than CO2 and were included in the basket of greenhouse gases under the Kyoto Protocol of the UNFCCC.

With production and consumption of HFCs rapidly increasing, the hard-earned climate benefits of eliminating ODS under the Montreal Protocol – estimated to be up to 135 billion tonnes (135Gt) of carbon-dioxide equivalent (CO2e) from 1990-2010 – are now being reversed.

A global deal to phase down HFCs would prevent 100Gt CO2e HFC emissions by 2050 with up to an additional 100Gt CO2 emissions through potential energy efficiency improvements, offering much-needed near-term climate protection.

With an ever-widening gap between what is required to limit global temperature rise to less than 2°C and existing mitigation pledges under the UNFCCC, countries must seize every opportunity to curb greenhouse gas emissions.

EIA urges all Parties to the UNFCCC to support these formal negotiations in 2016 under the Montreal Protocol in order to bring about a swift global agreement to address the consumption and production of HFCs.