EIA’s team at the 16th Conference of the Parties (CoP16) to the Convention on International Trade in Endangered Species (CITES) in Bangkok working flat out and around the clock.

Here, Tiger Campaign head Debbie Banks sends home a brief videoblog on all things tiger, talking about EIA’s tiger farming side event earlier in the week and looking ahead to what’s coming up.

The overwhelming consensus here at CITES, and elsewhere, is that the current situation is a crisis for elephants – but it’s still not clear what actions will be adopted to actually deal with the crisis on the ground. 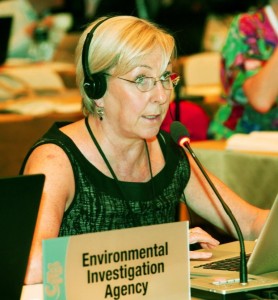 Significantly, though, experts from Monitoring the Illegal Killing of Elephants (MIKE) and the Elephant Trade Information System (ETIS) have recognised that demand for ivory is driving poaching and the illegal trade and there appeared to be consensus that more funds were needed to tackle poaching in range states.

EIA went to CITES CoP16 with a special briefing on elephants, urging Parties to Stop Stimulating Demand for ivory by discussing possible ivory trading mechanisms, and it was on this issue that Elephants Campaign head Mary Rice made a formal intervention on behalf of EIA yesterday (Thursday).

It was something of a reality check for everyone in the room as Mary stated that the continued discussion on developing a decision-making mechanism for trade in ivory is entirely irresponsible as it does not take stock of the crisis currently being faced by elephants across Africa and carries the risk of further stimulating demand for ivory and increasing poaching of already declining elephant populations.

However, as it seems that discussion of developing a decision-making mechanism will likely go forward, she urged that CITES should be extremely cautious in proceeding and identified some of the key conditions to be fulfilled for this process to go forward.

The best case scenario would have been if Parties had entirely discarded discussion of the decision-making mechanism in light of the current elephants crisis.

Even before we got to Bangkok, we expected it was likely this would go forward and that’s exactly what happened – the good thing, however, is that the adoption of such a mechanism has been deferred to the next CoP and, hopefully, the outcome of this process will be that such stringent criteria are applied to any trade mechanism as to make trade in ivory near impossible.